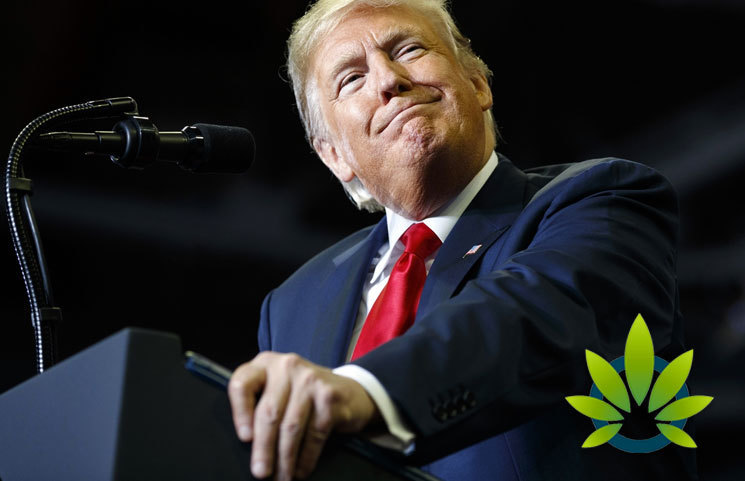 Industry leaders are starting to hypothesize what the current President of the United States will do in regards to his 2020 election campaign and cannabis reform. The odds of Trump using the cannabis card to lure in more votes has been expounded upon and many are starting to think he will use it as a catalyst for his own cause. With reference made to thoughts expressed by a number of individuals attending a conference held by the National Organizational for the Reform of Marijuana Laws (NORML), prominent news outlets trust that Trump can take either stance.

According to NORML’s Political Director, Justin Strekal, the group which started three years ago went from “six paid industry lobbyists [to] over 60.” This shows how far cannabis has come. The Founder of 4Front Ventures, Kris Krane noted that President Trump might support cannabis reform in 2020 because: “It would be smart political strategy for him to so.”

Earlier this month, we broke the news about Trump talking about state by state legalization, then this past week took the initiative to ban flavored e-cig vape products as well.

Sounds good doesn’t it? Here are some of the points made by Leafly that Trump may or may not use the cannabis card in the 2020 Election saying its ‘not impossible' he plays the ‘green-card' to boost his position for re-election:

For and/or Against Using Cannabis Reform

The news outlet previously reported that Trump despises cannabis legalization in anyway whatsoever. This distaste is believed to stem as early as the 1970s and 80s. Bearing this in mind, Trump being one who’d do anything to get re-elected may use the cannabis card. More specifically: “If he senses a couple percentage points in a legalization pivot, he just might jump on it.”

Interestingly, his previous efforts were as simple as creating the impression that he will consider any issue at hand, but whether actions will be taken remains a question for the future.

Nonetheless, cannabis is at its peak when it comes to uses and discussion. This is evident amidst medical marijuana legalization in certain states. Who can forget the added pressure from many wanting the plant to be out and rescheduled from its current Schedule I title due to barriers to research!? Sen. Ron Wyden (D-Oregon) was referenced here in which he said:

“Political change doesn’t start in Washington DC and trickle out. It starts with the grassroots and comes to DC from the group up.”

Donald Trump to Possibly Address His Stance on Cannabis Laws Amidst 2020 Elections?

As the presidential candidates take their turns expounding on what’s important to them and what moves they plan to make amidst the 2020 elections, one must have stopped to wonder what President Donald Trump is thinking. While media coverage on his retrospect on cannabis is minimal to nothing, many opinion pieces have made the argument that Trump may use cannabis to fortify his platform.

The first opinion stems from Market Realist, who looked at how Trump’s possible support could help strengthen the powerful country’s economy. To be more specific, both legal and medical cannabis in the U.S. amounts to revenues of $8.6 and $10 billion respectively in 2018. This comes from legalization on a state-level alone!

In addition, the growing market is expected to increase jobs. According to the claims made, in 2019, the cannabis industry’s growth supposedly resulted in some 175,000 to 215,000 jobs! Who can forget the tax revenues garnered, which could potentially help farmers and the entirety of the agricultural sector.

Since the 2018 Farm Bill, it has been argued that the hemp industry also bettered with that of the medical cannabis. In fact, many farmers have supposedly considered switching from tobacco to hemp production.

As for other players who stand by cannabis legalization, Market Realist makes mention of Bernie Sanders, Andrew Yang and Pete Buttigieg among an extensive list who’ve actively worked in either policies, taking action or a mix of both.

The next piece comes from Boulder Weekly, who assumed Trump’s possible cannabis support on the basis of how it can actually become accepted, with mention on the current U.S.-China trade war. The biggest limitation that currently exists with the cannabis plant, is that it is classified under Schedule I drugs, which includes the likes of heroin. This prevents researchers from understanding the health benefits of cannabis, even the cannabinoid, CBD.

Boulder Weekly argued that this could change given that the president has the power to either reschedule or de-schedule. Some of the reasons as to how removing cannabis from this respective schedule could lend a helping hand to Trump were mentioned as being:

Both perspectives come with a lot of processing, as Trump could go either or neither way. That said, the possibilities are there, and who knows, the president might catch us all by surprise!