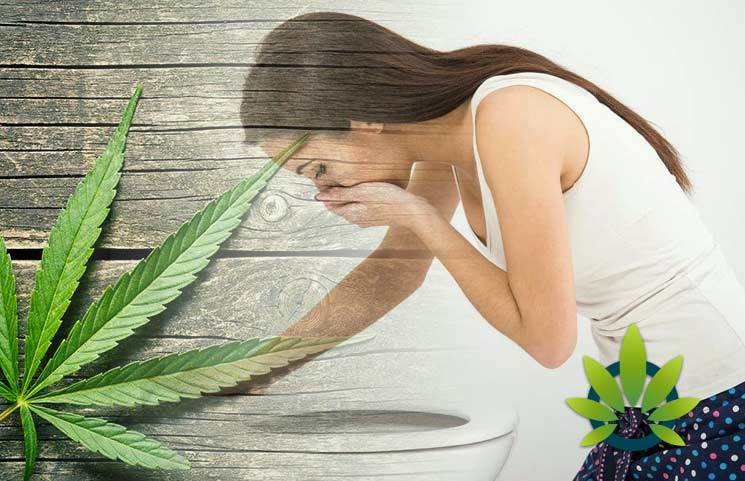 Some people use cannabidiol (CBD) to treat nausea and similar symptoms. Is there any scientific evidence supporting the use of CBD for nausea? Should you really use cannabidiol to reduce symptoms of nausea? Today, we’re explaining everything you need to know about cannabidiol and nausea.

Nausea is a common symptom of a wide range of conditions. Generally, nausea is characterized by an uncomfortable or unpleasant feeling in the upper stomach accompanied by the urge to vomit or throw up.

Many symptoms of nausea stem from problems in specific parts of your brain. Injuries that affect the lower region of the brain and the major artery that supplies this area, for example, can cause problems related to nausea and vomiting.

Some medications and foods can cause nausea. Patients undergoing chemotherapy, for example, frequently experience nausea due to the drugs. Chemotherapy drugs can also cause side effects like weight loss and loss of appetite, both of which are problematic for those trying to regain their health.

How Can Cannabinoids Control Symptoms of Nausea?

There’s some evidence that cannabinoids – including CBD and THC – can reduce symptoms of nausea. Some doctors will prescribe medical cannabis to reduce nausea caused by chemotherapy drugs, for example.

How THC Can Control Nausea

At the same time, THC can stimulate CB1 receptors governing your gastrointestinal tract. It can boost your appetite and help with weight gain, for example. Sometimes, those taking drugs – like chemotherapy drugs – experience nausea due to a lack of appetite and nutrition. THC can reduce symptoms of this type of nausea by encouraging people to eat.

How CBD Can Control Nausea

CBD and THC both come from the same cannabis plant. However, the two compounds affect nausea in significantly different ways. Research shows that cannabidiol may control nausea by influencing serotonin receptors, for example.

By influencing serotonin receptors, CBD can decrease the release of serotonin, which means there will be less stimulation of the vomiting center in your brain.

Other Cannabinoids and Nausea

CBD and THC are just two of many chemical compounds in the cannabis plant. There are hundreds of other chemicals in marijuana, hemp, and cannabis, all of which are collectively labeled “cannabinoids”. CBD and THC are two of the best-known cannabinoids for treating nausea, although other cannabinoids have shown growing evidence of anti-nausea effects as well.

Interestingly, research shows that CBD may be able to inhibit the breakdown of anandamide. CBD can help anandamide stay longer in the system, helping prevent its degradation and affect your CB1 receptors for a longer period of time.

How Do Dronabinol and Marinol Reduce Symptoms of Nausea?

Dronabinol is a synthetic THC approved by the THC. It’s often used to control mild to moderate chemotherapy-related symptoms – including nausea, loss of appetite, weight loss, and other issues.

Dronabinol has been shown to be effective at treating mild to moderate symptoms of nausea, although it often fails to treat more serious symptoms. The side effects caused by stronger chemotherapy drugs, for example, may be unaffected by Dronabinol or Marinol.

Another issue with Dronabinol is that it has side effects similar to THC. Because Dronabinol is a synthetic version of THC, it has similar psychoactive properties to THC. That means it can produce a “high”. It can also cause other THC-related side effects like paranoia, mood changes, and confusion. Some patients experience increased anxiety after using Dronabinol.

Because of all of these side effects, some patients are left searching for an alternative to Dronabinol that is not associated with uncomfortable side effects and psychoactive properties.

Some believe that the best anti-nausea solution is a mixture of CBD and THC – say, like the mixture you get from a strain of marijuana. A well-balanced mix of THC and CBD may allow you to enjoy the benefits of CBD and THC while limiting the side effects. Some studies have analyzed the effects of using CBD and THC to combat symptoms of nausea.

A number of studies have analyzed the anti-nausea effects of CBD and THC. In one study, for example, researchers analyzed whether THC could reduce chemotherapy-induced nausea and vomiting. The study involved 22 patients who were given oral THC and a placebo. When the patients took THC, 14 of the patients reported significant improvement in symptoms. These patients reported less nausea, for example, and improved appetite. The placebo, however, did not produce similar effects.

Some THC supporters point to this study as evidence that THC can reduce chemotherapy-induced nausea and vomiting.

However, the study also indicated that patients experienced significant side effects from using THC. Patients reported a feeling of being high, for example, along with other psychoactive changes like mood changes, feelings of elation, and mild motor problems. Some patients experienced negative effects like visual hallucinations, panic attacks, anxiety, increased stress, and paranoia.

But what happens when we combine THC and CBD? Can we maximize the benefits of cannabis while reducing the side effects? Let’s take a look at what studies have to say.

THC and CBD Can Be Combined to Reduce Nausea

One study gave patients a mix of THC and CBD. THC and CBD were combined into a spray at a ratio of 1:1. The spray is called Sativex and is used in the treatment of multiple sclerosis. Some patients also use Sativex specifically to reduce nausea and vomiting.

For this study, researchers used a dose of about 5 sprays per day. Each spray contains an approximate 1:1 ratio of THC and CBD, with approximately 2.7mg of THC and 2.5mg of CBD in each spray.

One study published in the Journal of Pain and Symptom Management in 2010 analyzed the effects of a THC/CBD combination with a THC extract. Researchers wanted to determine if CBD and THC were more effective than just THC on its own. They found that a mixture of CBD and THC actually increased symptoms of nausea compared to a placebo, although that same mixture was also more effective at controlling pain.

Researchers analyzed the effects of CBD and THC on 177 patients with cancer-related pain. These patients were not experiencing relief from traditional pain medication and were looking at alternative solutions.

Patients treated with an extract containing both compounds experienced a significant reduction in pain compared to those who received only THC extract. In other words, the combination of CBD and THC was found to be more effective at reducing pain than just using THC on its own.

Nevertheless, researchers found that there was no significant differences in terms of nausea symptoms. The THC:CBD solution was more effective at reducing pain than the THC solution on its own, although patients did not experience a difference in nausea symptoms:

Researchers, however, cited results from a study by the European Organisation for Research and Treatment of Cancer Quality of Life that showed a worsening in nausea and vomiting with THC:CBD compared with a placebo, whereas THC had no difference.

In other words, this study showed that nausea actually became worse when using THC and CBD compared to a placebo, while just using THC had no difference with placebo in terms of nausea symptoms.

The different results among all these studies show the need for more research on cannabidiol and nausea: at this time, there’s limited scientific consensus over what works for controlling nausea and whether or not CBD is an effective treatment for nausea. While some studies support using CBD for nausea, other studies do not.

Ultimately, patient experiences vary widely when using THC or CBD to control symptoms of nausea. Some patients experienced significant relief from symptoms with minimal side effects. Other patients experienced significant relief but at the expense of painful side effects. Some studies show that CBD and THC can effectively treat symptoms of nausea, while other studies indicate that they’re no better than a placebo.

Dosages also seem to vary widely between patients. Some patients can easily handle a higher dose, while other patients are fine with a low dose.

Talk to your doctor to determine if CBD and THC may be the right choice for controlling your symptoms of nausea and vomiting. Prescription solutions like Sativex and Dronabinol exist to help patients find relief, and doctors may prescribe these products or others to treat your nausea with CBD/THC.