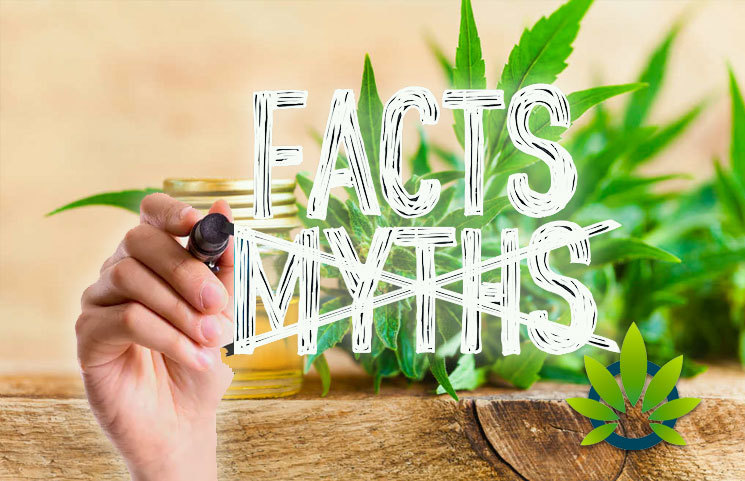 The war against cannabis is slowly coming to an end. It seems everywhere you turn a new beauty or self-care product contains CBD. Just recently the FDA decided to approve a CBD based drug for the treatment of seizure disorders. States all across America are voting in favor for the recreational use of medical marijuana.

But there are still some things that we don't understand about CBD. There is still a lot of confusion surrounding cannabis. People from all walks of life are beginning to wonder about the medicinal uses of cannabinoids. While the plant has been around since the dawn of time, it is only in our recent history have we started to tap into the fundamental purposes of this unique herb.

Yet despite the plants growing popularity there is still a ton of myth and misconception about cannabis, CBD oil, and hemp. But it's time to get the facts straight.

The first step to understanding the cannabis plant is to acknowledge that it comes with many properties. CBD, marijuana, hemp, are all different properties and in simpler terms cousins of one another. Due to the underlining legal situation between hemp and marijuana, it all boils down to the science of the plant. Hand and marijuana are simply two versions of the cannabis plant. Of course this will cause loads of confusion when trying to explain the differences.

These cannabinoids interact and affect the human body in various ways due to the large system called an endocannabinoid system or ECS. Essentially ECS is the way cannabinoids affect the body. There are only two primary endo cannabinoids one needs to concern themselves with and that is CB1 and CB2. These two endocannabinoids explain why cannabis can offer so many medicinal purposes while the compound THC causes neurological issues and CBD does not.

The Difference between CBD and THC

Since the beginning of time the cannabis plant has been used all around the world. While, at the time many people did not understand or fully grasp the medicinal purposes of the plant it was still used to help those people. Today however, we have been conducting tests to grasp all the purposes of this plant.

We have discovered that THC adheres to CB1 receptors in the body. These receptors are found in the brain and in the nervous system. Due to this adhesion the CB1 receptor activates the “high” response. However CBD does not bind to this receptor in the body and does not give you the side effect of being “stoned.” This helps shed some light on several studies showing promising medical purposes of using CBD.

While CBD and THC have “sister molecules” one of the more interesting side notes of cannabinoids is the “entourage effect.” The entourage effect is simply saying that cannabinoids are more effective in compound varieties than in isolated preparations. This is important when you are looking for cannabis products to find ones that offer a full spectrum instead of just going for the isolated products. The isolated products only contain single compounds and are considered being less effective and far more difficult to dose.

While CBD and THC are usually the only compounds in the spotlight there are tons of other cannabinoids. In fact the first cannabinoid that was discovered was Cannabinol or CBN. This part of the plant is explicitly used to help improve sleep. Within CBN you will find the two compounds tetrahydrocannabinols acid (THCA) and cannabidiol acid (CBDA). These are known as the parent molecules of CBD and THC but are both non-psychoactive.

The other cannabinoids which doctors find most interesting include tetrahydrocannabivarin known as THCV, cannabichromene or CBC, and CBG or cannabigerol. THCV, CBG, and CBC are the three cannabinoids that researchers are just now starting to study for their medicinal purposes and have yet to come up with any conclusions.

The Health Benefits of CBD

There is a very long list of medicinal uses for cannabinoids. Every day new studies are conducted. Doctors and medical researchers are looking into the benefits of using THC to relieve pain as well as the anti-anxiety properties of CBD.

Some tests have shown that CBD can help with arthritis pain, Alzheimer's, Parkinson's, PTSD, depression and anxiety, and even cancer. However, it is important to mention that these test cases are still in the preliminary stages despite the FDA approving a THC based drug that is used for seizure disorders.

There is a huge difference between CBD oil, hemp oil, and hemp seed oil. Hemp seed oil is derived from sterilizing seeds of the cannabis plant while omitting the cannabinoid content. Hemp oil on the other hand extracts the oil from the whole plant and does contain CBD in varying amounts due to the way it is distilled. Truth be told many of the products that are listed as CBD oil are glorified hemp oils that are enriched with CBD. And it is quite possible for you to find CBD on its own and typically referred as CBD isolate. However many specialists and experts do not recommend using this form of product due to the lack of the “entourage effect.”

It is very clear that CBD has a wide range of medical uses. From helping with seizures, to sleep disorders, and dealing with chronic pain this substance offers a natural alternative to prescriptions. And while some will still believe the myths that CBD has negative side effects, scientists will continue to prove them wrong.