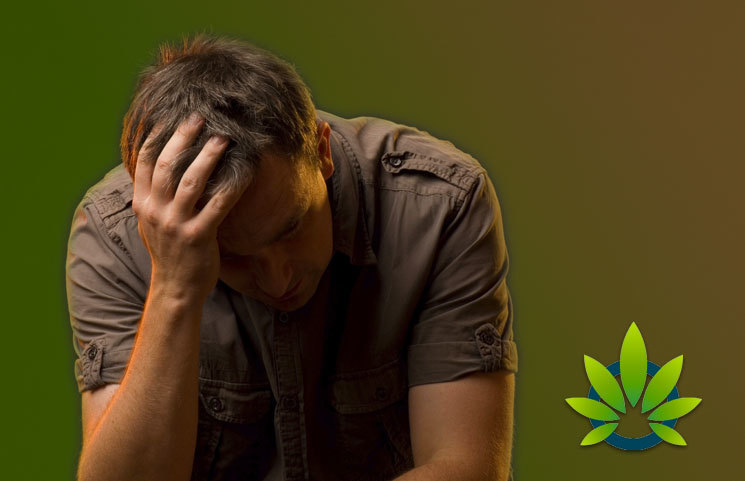 Medical cannabis is often prescribed for mental health issues. Many doctors recommend using medical cannabis to reduce the effects of anxiety and post-traumatic stress disorder, or PTSD. The cannabinoids in the cannabis plant can soothe your mind.

However, cannabis is not always the best option for treating PTSD and similar conditions. Some strains can reduce the effects of PTSD short-term but exacerbate the condition long-term. Some strains make you more paranoid and can raise anxiety.

Cannabidiol, or CBD, is one of the most popular compounds found in the cannabis plant. A growing amount of research has linked cannabidiol to reduced symptoms of anxiety and PTSD. CBD allows users to enjoy the positive effects of medical cannabis without the “high” associated with psychoactive compounds like THC. Unlike THC, CBD is non-psychoactive: it does not give you the “high” traditionally associated with marijuana.

Keep reading to discover everything you need to know about cannabidiol and post-traumatic stress disorder.

What Is Post-Traumatic Stress Disorder?

An estimated 70% of American adults have experienced a traumatic event at least once in their lives. As many as 20% of these people go on to develop post-traumatic stress disorder (PTSD). Today, an estimated 5% of Americans – or 13 million people – have PTSD at any given time.

PTSD, however, persists well beyond the event. PTSD produces recurring symptoms that can interfere with your normal daily activity. Some of the signs you may have PTSD include:

Remember that symptoms of PTSD vary widely between individuals. Some might feel all of the symptoms listed above. Others might only experience one or two of the symptoms.

Often, those with PTSD feel like they’re unable to control their body’s emotional responses. They feel like they can no longer handle their emotions. This is not a sign of weakness: it occurs because traumatic stress is changing your brain.

The Physical Effects Of PTSD

Today, research on mental illness continues to evolve. We no longer believe that PTSD is “all in your head”. Instead, we recognize that there are physical effects behind the condition. Your body literally changes in response to a traumatic event, and PTSD is one result of those physical changes.

Stress hormones, for example, change the communication circuits in your nervous system, including your hippocampus, which is the part of the brain involved in verbal declarative memory.

Many of those with PTSD also have lower levels of the stress hormone cortisol on a normal day. However, their response to stress can cause cortisol levels to spike unusually high, making them have intense reactions to triggers.

Meanwhile, PTSD can also affect the neuronal circuits involved in expressing emotion and managing fear. Certain types of conditioning can change those circuits, changing the way your body expresses emotion and fear.

The effects of PTSD have been demonstrated in studies on both humans and animals. In one study, animals were conditions to feel fear when they are shocked after touching an innocent object – like an empty box. After repeated instances of shocking, the animal will begin to experience anxiety as soon as it sees the box – regardless of whether it gets shocked.

Over time, the animal can be conditioned to stop feeling nervous every time it sees the box – assuming the shocks have stopped. The study showed that the brain can be re-wired over time to stop associating the box with a traumatic event. It requires the brain to be “re-wired”. It takes time.

People with PTSD experience significant changes to their neuronal circuity. These changes can prevent fear conditioning from being released. Being exposed to distressing reminders of the trauma can cause an increase in PTSD symptoms in the future.

How Do Cannabinoids Affect A PTSD Brain?

We’ve established that PTSD has significant effects on your brain. Today, some people choose to use cannabidiol (CBD) and other cannabinoids to reduce the symptoms of PTSD.

The two best-known cannabinoids in cannabis are THC and CBD. Both of these compounds affect the endocannabinoid system, which is a network of receptors and neurotransmitters in your body that help you stay healthy.

As PTSD research grows, we’re beginning to understand more about how PTSD works. Researchers have noted that PTSD symptoms are often produced by changes in the way emotional memories are processed.

With that in mind, effective PTSD treatment should block the intensified association and retrieval of traumatic memories, enhance the extermination of those memories, and diminish anxiety.

That’s where many believe CBD and THC can help. CBD and THC affect the endocannabinoid system, which regulates emotions and contributes to the consolidation, recovery, and elimination of memories. This is why some believe cannabis can be an effective PTSD treatment.

Your endocannabinoid system consists of the following:

CBD acts on some of these systems, which is why some researchers believe it can help target PTSD symptoms.

Furthermore, CBD may be more effective at targeting effects throughout your body. Cannabinoid receptors are spread throughout the central nervous system. They’re found in the same parts of the brain that are affected by PTSD. Your endocannabinoid receptors play a crucial role in regulating emotional behavior and mental functions:

Your endocannabinoid’s system CB1 receptors, for example, are associated with processes that control neural communications

The CB2 receptors, meanwhile, are linked with immune responses

When operating optimally, your endocannabinoid system helps you stay emotionally balanced. It regulates your emotional response to stimuli. PTSD, however, can degrade normal function of this system. Some believe that CBD can reverse the trend, restoring certain processes in people with PTSD.

To sum up, your endocannabinoid system is intricately connected with the parts of your brain that are often affected by PTSD. That’s why some believe CBD and THC can target the effects of PTSD.

How Is PTSD Traditionally Treated?

PTSD is difficult to treat. Like depression, there’s no single treatment that works for all individuals in all situations. Some treatments completely relieve some individuals, while the same treatment might have no effect whatsoever on somebody else.

Some of the traditional treatments for PTSD include:

Many individuals with PTSD will receive prescriptions for multiple medications simultaneously. Although this can work effectively for some, it can also exacerbate side effects and drug interactions.

All of the drugs above are also associated with significant side effects. Although they can reduce symptoms of PTSD in some individuals, they can also lead to significant side effects. SSRI usage can lead to serotonin syndrome, for example, which occurs when serotonin levels are dangerously elevated. Other medications can lead to fatigue, nausea, nervousness, headaches, blurred vision, sexual dysfunction.

Furthermore, many of the drugs listed above fail to target all symptoms of PTSD. Some of the drugs above have been proven to reduce anxiety, for example. However, they do little to target the concentration and memory problems associated with PTSD.

How Can CBD Improve PTSD Symptoms?

PTSD is a complicated disorder. Symptoms vary widely between individuals, and no two PTSD cases are alike. Nevertheless, some individuals with PTSD have found relief with cannabidiol (CBD). CBD works on different parts of your endocannabinoid system, possibly relieving various symptoms of PTSD.

Some of the effects that may be associated with CBD usage can include:

CBD has been shown to reduce anxiety. Individuals with PTSD may develop general or acute anxiety. When left untreated over time, this severe anxiety can significantly interfere with your normal life. In one 2008 study, researchers found that CBD facilitated fear extinction by making rodents less anxious, for example. Rodents were less anxious when exposed to a known source of trauma after taking CBD. In recent years, a growing number of studies have indicated a link between CBD usage and reduced anxiety.

May Improve Symptoms Of Depression

Some studies have indicated that CBD can reduce symptoms of depression. This effect is similar to a selective serotonin reuptake inhibitor (SSRI): CBD binds to serotonin receptors, thereby boosting your mood. Some believe that CBD works as a type of natural anti-depressant because of its effects on your body’s serotonin levels.

CBD May Make It Easier To Fall Asleep

In one study published in CNS Neuroscience & Therapeutics in 2009, researchers used a synthetic cannabinoid called nabilone on individuals with PTSD. Nabilone is designed to mimic the effects of CBD. 70% of patients experienced a reduced frequency or intensity of nightmares. Many participants reported sleeping better and longer than they previously had. Some participants also reported fewer instances of “daytime nightmares” or flashbacks.

CBD May Prevent Abuse Of Harmful Compounds And Drugs

Many individuals with PTSD attempt to self-medicate with recreational drugs, prescription drugs, alcohol, and other potentially harmful compounds. While these compounds may have short-term benefits, they rarely treat the condition long-term. Prolonged use of marijuana to treat PTSD, for example, may make psychological illnesses worse.

Some believe CBD is a better option for treating PTSD. CBD offers many of the same therapeutic benefits of cannabis without the same risk of addiction. You can focus on the benefits of marijuana without worrying about being addicted to the “high” of the drug.

Many doctors avoid prescribing medical cannabis to PTSD sufferers with a high risk of abusing the drug. CBD may be an ideal solution for certain individuals with PTSD because users can maximize the benefits of the drug while minimizing the risk of addiction and abuse.

How To Use CBD For PTSD

Research on CBD continues to grow. However, there is limited scientific consensus about CBD dosages.

The problem with CBD dosage information is that many of today’s studies are done on animals – like rats. Rats can handle a dose of 10mg per kg, but the average human could not. A dosage of 10mg per kg is equivalent to a dose of 680mg per day for a 150-pound person.

Ultimately, there is no recommended daily allowance for CBD dosage when treating anxiety, and there’s no scientific consensus over how much CBD you should take. Generally, experts recommend starting low and increasing the dosage over time while monitoring your effects.

A good baseline, according to some CBD experts, is to take a dose of 25mg of CBD once or twice per day. Observe the effects of this dose for a week. Then, you can reduce or increase the dose based on your experience.

Ultimately, there is some evidence that cannabidiol can treat symptoms of PTSD. However, it’s far from a proven treatment, and more research needs to be done to confirm the effects of CBD on the human body and brain.

Nevertheless, some doctors may recommend CBD as a way to safely reduce the effects of PTSD without the side effects associated with traditional drugs or medical cannabis. When treating PTSD with CBD, you may be able to enjoy the anti-PTSD symptoms of medical cannabis and traditional drugs without the harmful side effects and risk of addiction. For all of these reasons, a growing number of individuals with PTSD are finding relief with cannabidiol (CBD).