Latest on How President Donald Trump is Doing with Marijuana Policy?
Advertisement 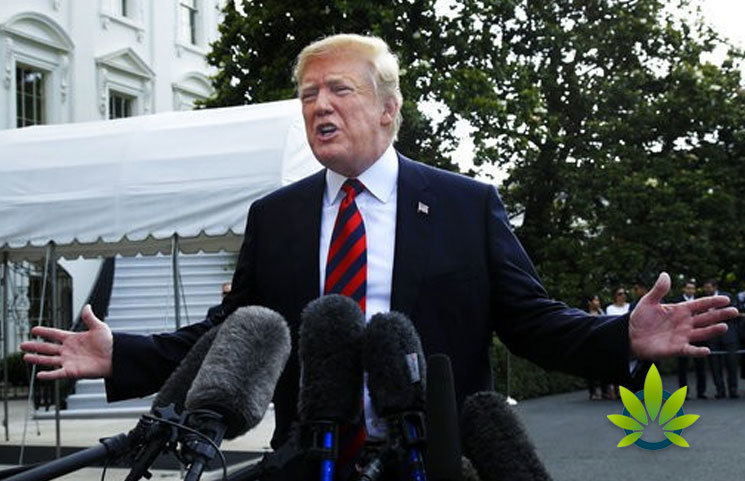 Through the last two months, Canna Law Blog has been going over the Democratic Party’s candidates for president in 2020. Through their reviews, they have examined the way that these candidates have historically handled matters relating to marijuana laws and policies. So far, the blog has already covered Joe Biden, Bernie Sanders, and others, but they turned their focus to the presumptive Republican Party nominee and current President of the United States, Donald Trump. Based on his history with cannabis, the website graded his work a D+.

His overall stance on marijuana isn’t actually clear at this point. He’s stated that he supports medical marijuana and has said that states should decide on this legalization. However, in his time as president, he hasn’t followed through with his so-called pro-legalization stance, despite promises in the 2016 election that he would be letting states choose to legalize the substance.

Following his election, Trump changed his stance. Two years ago, the Trump administration rescinded an Obama-era policy called the Cole Memo, which prevented the federal government from interfering with states that chose to legalize marijuana. Sean Spicer, who was the Press Secretary at that time, implied that states choosing to legalize marijuana would see a major crackdown, but no directive was issued to do so.

In April, Trump stated that he would likely sign a bill called the STATES Act that would make it possible for stated to legalize marijuana. The current Attorney General, William Bar, said that he hopes legislation will be approved to stop the conflict occurring between federal and state laws. With the number of people in the United States that are in favor of marijuana legalization, the changing stance is likely an effort to gain the support of the American public.

At this point, despite supporting the STATES Act, he hasn’t advocated for marijuana at all. The substance cannot be found on the website or his social media. However, he did make the bold statement that, in the event of reelection, he would make it possible for states to function without interference from the federal government. However, the policy would not reschedule marijuana, which is more of a concern to the public and even the FDA right now.

Trump has continued to push along the War on Drugs, imprisoning thousands of Americans for their drug charges in the last few decades. He even complimented Rodrigo Duterte, the President of the Philippines, on his own policy on dealing with drug users, which is simply sentencing them to extrajudicial death. He even has stated that his wall on the border between the United States and Mexico was an effort to stop drugs from entering the US, despite the fact that the majority of these trafficked drugs are moved through legal ports.

Through the last few decades, it has been made clear that the military intervention on drug trading has been ineffective, at best. Instead, it has caused these drugs to increase in value, providing drug cartels with the fuel they need to become more profitable. Essentially, the drug trade doesn’t appear to be stopping for as long as a demand for them is present. Though funds are presently allocated to support programs for drug addiction, solving the opioid epidemic is far away.

While Trump signed “The First Step Act” to reduce the minimum sentence for non-violent crimes, the fact remains that his administration has broken previous promises that Trump made on the campaign trail. Furthermore, even though he’s promised to stay away from states’ legalization laws, marijuana would still be illegal. Still the biggest problem that led him to be graded so poorly by Canna Law Blog is the inconsistency with is stance and his actions.

List of What Legal Marijuana Advocates Want to Know from Presidential Candidates?