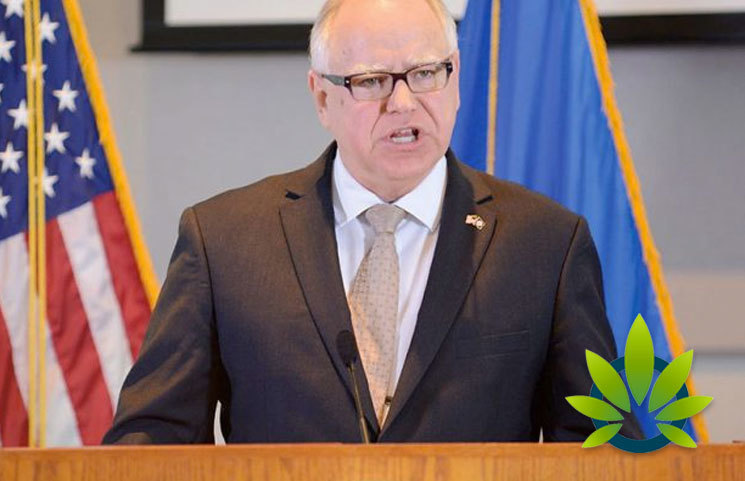 Legalizing marijuana can vary by each state, determining what kind of use is legal and what limits will be imposed. In Minnesota, it is clear that the governor is getting ready for next year’s legalization, as the governor expresses the need for agencies to prepare.

Legislators are still looking at options to determine what legalization would do to the current regulations and laws, but Governor Tim Walz already told the Minnesota Public Radio that the state agencies are directed to prepare for it. Walz stated,

“My agencies have been tasked to put all of the building blocks in place, from Revenue to the Department of Public Safety to the Department of Health. We will have everything ready to go, and we will be able to implement it in Minnesota the minute the Legislature moves this.”

Ryan Winkler, the House Majority Leader, recently wrote an article for the Star Tribune, voicing his support for the reform of marijuana laws. He stated that, next year, he plants to sponsor the legislation necessary for legalization, adding that it is important to “be serious” about this matter. In the editorial, he added that the Republicans of the state Senate had blocked a proposal to study legalization, which would effectively “address the many issues” involved with the prohibition. By understanding the substance better, the government could determine the best way to regulate cannabis.

Even with leaders in the House and the governor in support of legalizing marijuana, the challenge appears to be the upcoming battle with the Senate, which is predominantly Republican. Winkler and Walz are both Democrats. A bill presented to the Senate for legalizing marijuana was defeated last year, and Senate Majority Leader Paul Gazelka – a Republican – stated that this proposal is simply “not good for Minnesota,” adding that it is “dead.”

As Winkler prepared to bring forth a new legalization bill, he’ll be making it possible for other Minnesotans to voice their stance on the proposal. He stated that, for the leaders who have already examined this issue, “legalization is the path we have to take.” However, he places the discussion with Minnesotans as being a priority for this matter.

The locals already have developed groups for advocates of legalization, including Minnesotans for Responsible Marijuana Regulation. The campaign manager or the group, Leili Fatehi, spoke with Marijuana Moment, explaining that they’ve recently spoke with the governor about his strategy to achieve legalization. Fatehi said:

“We had a direct conversation with the governor last week where he made it clear he wants to act on legalization and has instructed all applicable departments to have answers prepared before the start of the 2020 legislative session about the different regulatory dimensions of legalization (taxation, licensing, public safety, etc.).”

The advocacy group has also met with Winkler, and it said that the fact that the executive branch plans to take this matter on directly will “build trust on all levels,” especially with the public and with policymakers. The group felt, upon meeting with the officials, that they’ll be taking on a “strong role” with the policy response before the legislative session in 2020.

Two separate House committee managed to approve a legal marijuana system this year, but the legislation died with the Senate later on, despite the task force that the governor gathered together. With the failure of the last bill, organizers seem “especially excited” about the new director, as the governor encourages agencies to prepare.

Even though the directive from the governor may be helpful in setting the stage for legalization, the creation of a regulatory model is a little more difficult to achieve, as the task force would need to take taxation and licensing into account.

Another political committee that is trying to champion for legalization is Cannabis for Economic Growth, run by Democratic-Farmer-Labor (DFL) party’s former executive director, Corey Day. Much of their focus seems to be on the positive impact that a regulated cannabis market could have on the economy. Day directed attention to the impact of taxation, revenue, and other factors, which all drive new profit back into the economy.

Smart Approaches to Marijuana has stated that they see legalization as something that will be inevitable but moving too fast could ultimately create chaos. Judson Bermis, the chair of the Minnesota chapter of the organization, explained, “We don’t have to be the 12th state. Maybe we could be the 42nd state.”