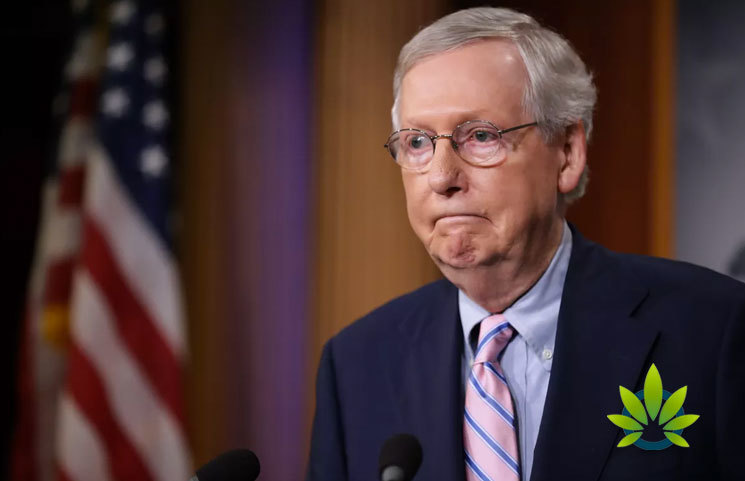 The Food and Drug Administration still needs to officially release regulations on the use of CBD in supplements and food products, and Senate Majority Leader Mitch McConnell (R-KY) is working to fix that. According to reports from Marijuana Moment, McConnell is working to add language to a current spending report, pushing for the FDA to pave the way necessary to legally market CBD products.

So far, the FDA has stated that CBD’s ability to be sold as a food item or a dietary supplement would mean that alternative regulations need to be developed. However, without action from Congress, these regulations could end up taking years to finished. McConnell, who was the biggest proponent of hemp legalization in the Farm Bill, has decided to take action, rather than waiting around.

The senator shared draft language by the US Hemp Roundtable this week, asking that the FDA “issue a policy of enforcement discretion with regard to certain products containing CBD.” He asked that the request be met within 120 days, which would provide clarity to rules for banks, making them more willing to offer services to CBD companies.

On Tuesday, the Senate Appropriations Subcommittee on Agriculture will mark up the provision of the spending report. Then, it will go to the full Appropriations Committee two days later. The FDA, before it can issue the new policy under the amendment, will need to submit a report to the committee within 90 days. The report would describe the “progress toward obtaining and analyzing data to help determine a policy of enforcement discretion, and the process in which CBD meeting the definition of hemp will be evaluated for use in products.”

After the new provisional enforcement guidelines are established, the guidelines would continue to be implemented until the regulatory process is finalized by the FDA. The report states that the authority should include knowledge regarding the current and continual medical research on CBD as part of an Investigation New Drug (IND) application as they create the regulations. This research may also help the FDA to prevent their regulations from discouraging the creation of new drugs.

Apart from the proposal, there’s already about $2 million set aside to support research, as well as regulatory activities, for CBD. The same bill already is funding the FDA and the US Department of agriculture.

Lawmakers and manufacturers alike have already expressed intense interest in the legalization of hemp and its derivatives. However, CBD’s marketability, or lack thereof, has been a major roadblock. Two lawmakers recently pushed for support from other House members in signing a letter to the head of the FDA, asking for guidelines that would make it possible for companies to sell CBD products.