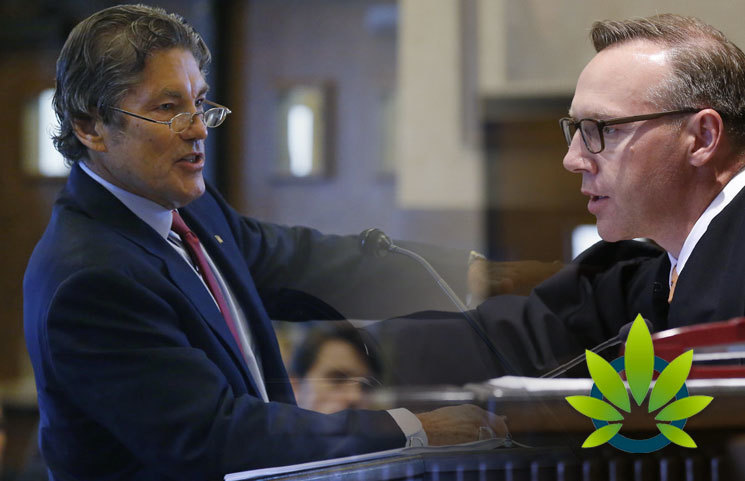 Johnson & Johnson (J&J) has been slapped with a potential $17 billion lawsuit for having used a marketing strategy that seems to have driven opioid crisis in Oklahoma reports Microsoft News’ MSN.

As per the claims made, an Oklahoma judge will be deciding Monday, August 26, 2019 at 4PM EDT, whether or not J&J will be held liable. A remarkable 2,000 opioid lawsuits are pending for a verdict in Ohio, with trials pushed closer to October.

That said, J&J’s lawsuit depicts a years-long marketing campaign that expounded on their painkillers’ benefits without mentioning so much on the associated risks. Their drugs, Duragesic and Nucynta were supposedly overly-prescribed by doctors, which carry some opioid.

In response to the allegations, the firm argued that their painkillers were supported by scientific proof that it only played a “tiny fraction of opioids prescribed in Oklahoma,” emphasizes the news outlet.

Attorney General, Michael Hunter is the one who wants J&J to pay up over $17 billion. The money will be used towards helping the state to address the crisis at hand and what can be done to protect residents over the course of 30 years, especially in terms of treatments and programs.

This isn’t the first case with a large sum of money in pending, as Purdue Pharma LP’s OxyContin supposedly had to pay up $270 million in March and Pharmaceutical Industries Ltd.’s Teva resulting in $85 million.

Could CBD Be THE Viable Solution?

With the opioid crisis on the rise, and the numerous pharmaceutical companies getting exposed, consumers are surely to turn in the direction of cannabidiol (CBD). Deemed a type of cannabinoid, free of mind-altering properties and derived specifically from the hemp plant, many existing studies have concluded that it serves as a natural pain reliever.

CBD’s anti-inflammatory properties are trusted to make a positive difference in those experiencing chronic pains, some of which include neuropathic pain, arthritis, migraine, and fibromyalgia among many others.

While researchers are still not sure how it communicates with the body’s endocannabinoid system (eCS), as more studies are being conducted, similar results depicting its pain relief properties are being voiced.

Bearing this in mind, consumers need to be aware that not all CBD products are Food and Drug Administration (FDA) approved. As of now, Epidiolex is the only drug approved by the agency, for the sole purposes of epilepsy (containing both CBD and THC).

Recently, researchers at the University of New Mexico supposedly used a large database of real-time recordings that looked at the effects of commercially available cannabis products across the U.S. The team concluded that there is a

“Strong evidence that cannabis can significantly alleviate pain, with the average user experiencing a three-point drop in pain suffering from a 0 to 10 point scale immediately following cannabis consumption.”

One of the lead investigators of the study, Jacob Miguel Vigil spoke of the findings and limitations that currently exist. As per Vigil,

“Cannabis offers the average patient an effective alternative to using opioids for general use in the treatment of pain with very minimal negative side effects.”

That said, the problem now becomes the inability to conduct research. Obviously, with any new ingredient for medicinal purposes comes the search for reliability and validity. If enough studies are not conducted, then results cannot be generalized to the population.

Vigil stressed the need to get cannabis out of Schedule 1, adding that even reclassifying as

“Schedule II, i.e. classifying with fentanyl, oxycodone, and cocaine rather than heroin and ecstasy could dramatically improve our ability to conduct research and only would require that the DEA recognizes that accepted medical uses for cannabis exist.”

The researcher further noted that the cannabis plant is surely to house different cannabinoids that tend to pain and aches, which could also include flavonoids and terpenes. Nonetheless, the study did find that cannabis use is “relatively safe”.