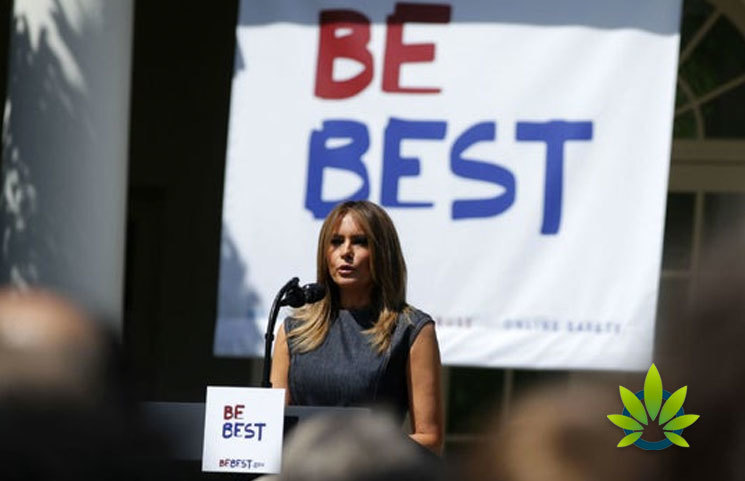 The Trump Administration may soon ban flavored e-cigarettes as part of the efforts to prevent companies from appealing to teenagers.

The First Lady’s remarks touch on the upcoming Red Ribbon Week, which begins on October 23rd.

Melania Trump, the First Lady, has advocated against bullying as her platform since husband Donald Trump was sworn into office. Now, she is taking on e-cigarette companies, aiming to stop this sector of the industry from advertising their products to teenagers, amid the many vaping-related lung injuries. She recently appeared at a US Drug Enforcement rally for drug abuse prevention and awareness, where she stated that the risks of e-cigarettes should be provided to teenagers.

“It is important to me that we all work together to educate children and families about the dangers associated with this habit.” She has a son with president Donald Trump who is 13 years old, which may make this issue a little closer to home. During the rally, she pushed for manufacturers to stop marketing their products to such a young audience, stating, “Marketing this addictive product to children must stop.”

The Trump administration announced in September that it was working on a ban that would federally criminalize flavored e-cigarettes, partially as a response to the many lung injuries that are connected with vaping in the United States. While the CDC confirms that a big part of the problem is the distribution of illegal THC products on the black market, the administration continues focusing on vaping specifically.

“The vaping has become a very big business, as I understand it, like a giant business in a very short period of time. But we can’t allow people to get sick and we can’t have our youth be so affected.” He added, “We’re going to have to do something about it.”

The remarks made by the First Lady precede the upcoming Red Ribbon Week, which starts on October 23rd. This week has been around for decades, encouraging young students to make a pledge that they will not use drugs in the future. During the rally, Mrs. Trump touched on drug addiction and the danger that it can bring to people.

“In my time as first lady, I have traveled to hospital and visited rehabilitation centers where I have seen first-hand the horrible results of drug abuse. Our administration will continue working hard in fighting the opioid crisis.” The first Red Ribbon Week occurred in 1985, following the murder of undercover DEA agent Enrique “Kiki” Camarena. Parents and children across the country wore red ribbons as a symbolic way to raise awareness of the destruction and killing causes by drugs. It is the longest-standing drug prevention program in the United States.

Mrs. Trump believes that any young person that is presently using drugs should be encouraged to seek treatment and get out of addiction. As the CBD interest continues to grow and different methods of administration form, it becomes vitally important to have the right testing of quality control measures.

She added, “Illegal use of drugs destroys too many families in our country. Drugs are taking a toll on our most vulnerable.” She added, “I will continue to address addiction as long as it affects our children, our youth, and our schools.”