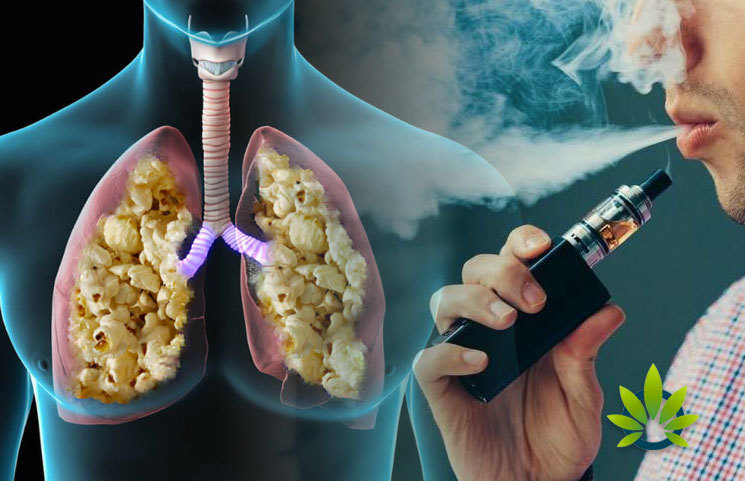 With the recent reports of health issues and dangerous lung conditions that seem to be connected to vaping, the United States has clearly become wary of these devices. CBD continues to grow increasingly popular as well, and CBD vape products are becoming a major topic as well. However, are these vape products safe for consumers? Can they cause a condition referred to as popcorn lung?

Popcorn lung is a much less intimidating moniker for an ailment called bronchiolitis obliterans. This disease causes the bronchioles to become smaller, since it creates inflammation. Some of the symptoms that arise from this inflammation include shortness of breath, fatigue, coughing, and wheezing. The nickname for this term arose after workers at microwave popcorn factories were found to be more likely to have this disease than others.

The chemical that causes this condition is called diacetyl, which is used to create the butter-like flavor in the food it is used in and is even found in margarine. When vaping became more popular, it was used in some vape liquid flavors. It is entirely safe to eat and digest, but the inhalation of it is a little riskier.

According to a 2016 Harvard study, of 51 samples of e-liquid, 39 samples had diacetyl. However, the total selection of e-liquid only came from eight different brands. With this limited selection and the results, the study caused panic amongst consumers, ultimately leading the media to create anti-vaping content in a smear campaign. As a result, many e-liquids were forced to remove it, and there were many locations that even imposed a ban on its use in vaping products, like the UK.

Realistically, there has yet to be a single reported and verified case of diacetyl causing popcorn lung, much less vaping. However, the same ingredient has been found in cigarettes, and at 40 times the amount that vape liquids offer. The research is still very limited on vaping, which is why no one should assume that it is just 100% safe. However, the limited evidence (if any) doesn’t indicate that vaping CBD has any affect on whether someone falls victim to popcorn lung.

For consumers that are still concerned over the effects that CBD e-liquid could have with diacetyl, a potential alternative is CBD concentrates. Vaping a concentrate helps to cut agents and avoid carriers, including propylene glycol (PG) and vegetable glycerin (VG). While these substances are generally concerned safe but could negatively impact the public. The use of CBD concentrates instead completely eliminates the worry, while offering a more potent reaction.