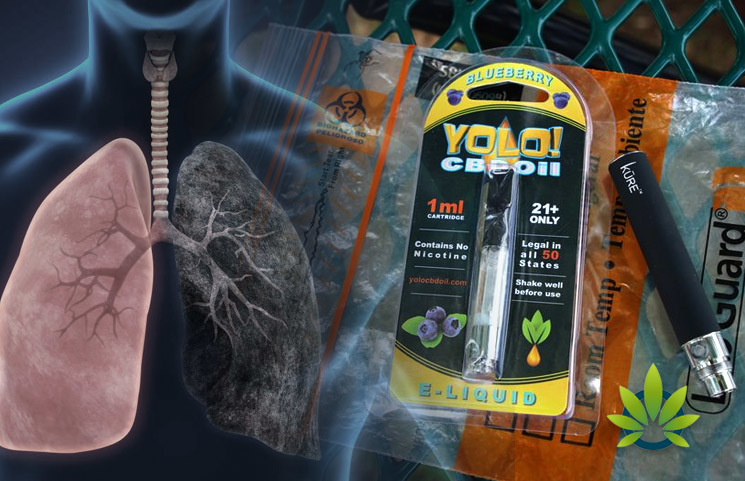 Hundreds of people have already come down with lung illnesses that are connected to the use of illegal vaping. The woman is facing up to 40 years in prison.

The many lung illnesses deriving from vaping devices have been on the minds of politicians, retailers, and even manufacturers. The CDC made remarks a few weeks ago that many of these illnesses were linked with the illicit products in the market, and new reports from USA Today indicate that it looks like there’s a woman in California that the illegal vapes can be traced back to. In a surprising turn of events, this woman is one of the pioneers of the CBD movement.

Recently, over 50 people in Salt Lake City have been poisoned by a synthetic marijuana vape, believed to have been a CBD formula. Many of these people were using Yolo!, a vape that started off a string of mysterious issues with the lungs. While hundreds of vape users have developed illnesses, over 30 people have died, but the impact that the users of Yolo experienced was instantly recognized as off. Rather than providing users with a therapeutic experience, the users were met with hallucinations and (in some cases) seizures.

Public health officials seemed incapable of determining the source of the Yolo vapes, since they faded out of existence shortly after. However, the Associated Press decided to investigate further, leading them to an entrepreneur named Janell Thompson. Thompson had moved from Utah to San Diego in 2010, using her background in financial services to found Hookahzz, an e-cigarette company.

With her partner, Thompson was able to bring these products to a pre-party for the Emmy Awards, and the products were even used in Oscar nominee gift bags just five years ago. Hookahzz was one of the first companies that delivered CBD to the public, since cannabidiol was a relatively new to the public in this form. Even though it is now found in skin creams and edible snacks, it was illegal and rare just a few years ago.

The Mathco Health Corporation was formed in 2017 between Thompson and her partner, and the synthetic marijuana known as K2 or spice was quickly popping up in Salt Lake City. This type of marijuana is manmade, costing a small amount of what the cost would be to actually create CBD. In Utah, labs examined samples of Yolo, discovering that there was no CBD inside these vapes at all, and instead contained dangerous synthetic marijuana that is connected with no less than 11 deaths in Europe alone.

According to the authorities, it is possible that consumers wanted to purchase Yolo for the “high” effect, while others chose it without the knowledge that it was harmful. Before now, the source of this substance was unknown, as no contact information was printed on the label and the stores that sold it were unwilling to provide any additional details.

By May last year, the case didn’t appear to have any leads, but the following summer months led Tatianna Gustafson, a former Mathco bookkeeper, to start collecting information on her idea of bad business practices. Based on the complain filed against Mathco, she found pictures that indicated that Yolo was the culprit behind the poisonings that happened in Utah. Ultimately, the former bookkeeper aided in bringing the source of this company to the DEA, which didn’t take law enforcement action. After all, with an opioid epidemic having already killed tens of thousands of people, the idea of spiked CBD wasn’t exactly a top priority.

Presently, with all of the accusations against Thompson for her production of synthetic marijuana, she is facing up to 40 years in prison. She was contacted for comment before her guilty plea, but ultimately referred all questions to her lawyer, who also did not respond.

Thompson’s alleged partner, Katarina Maloney, has not been charged at this point, and has said that she isn’t interested in discussing this matter.