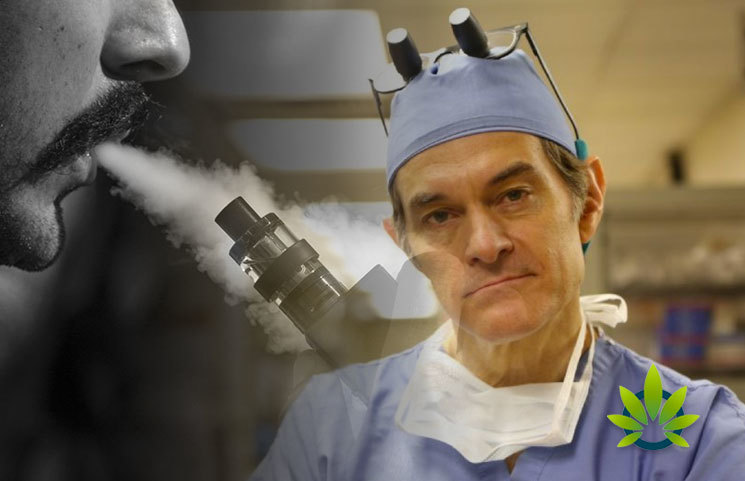 Dr. Oz is known for a lot of things, like his talk show where he keeps his audience informed about the latest developments of the medical world. Never shying away from discussing CBD, he recently sat down with a radio show called The Breakfast Club, where the first discussion on the matter emerged as a segue from vaping. Vaping has been called into question by the federal government and the CDC recently, due to lung illnesses arising from their use, which have already caused several deaths.

On the controversial topic, Dr. Oz initially stated, “It’s a great tragedy of this past year that the vaping industry did not clean up their act.” He explains that there could be “fake versions” of real products out there, which the CDC has eluded to by saying that much of the THC in these devices has come from the black market. He also blamed the creation of vitamin E acetate, which is “basically a grease,” which can stick to the lungs.

However, Dr. Oz doesn’t see the black-market products or even the addition of vitamin E acetate cartridges as the real problem. Instead, he shifts the attention to the reason for the recent government crackdown, stating, “These companies knowingly sold to children.” He stated that the design of these products is easily concealed from parents, and that the companies are developing flavors that are geared towards childlike palettes. He said that these actions show that the companies are no longer selling to adults exclusively and, while the government already wanted to go after the companies, this epidemic is giving the government “an excuse” to ban vaping all together.

Regardless of the epidemic, it is clear that vaping comes with some benefits. Dr. Oz stated that he believes vaping works for consumers, adding,

“Vaping helps people get off cigarettes. Vaping is a very efficient way of delivering medical marijuana in a dose that you want without all the other stuff around it, so I think it was a great invention.”

Unfortunately, this technology has been exploited and corrupted, pushing it further away from all the good that it could do.

There have already been cities, states, and the federal government to impose bans, but Dr. Oz doesn’t think that’s the answer. Instead, there needs to be honest players that can be trusted to police themselves to have less government involvement with more safety.

He brings up CBD as an example, saying that the CBD industry is filled with fakes, because the government has not imposed regulations, leaving the bad actors to rise up. While he believes that CBD is effective, the necessity to find good companies is the only way that these products will work, but so many remedies are either fake or too weak. He stated that the real CBD products will end up costing more from the simple fact that the process to develop it is expensive..