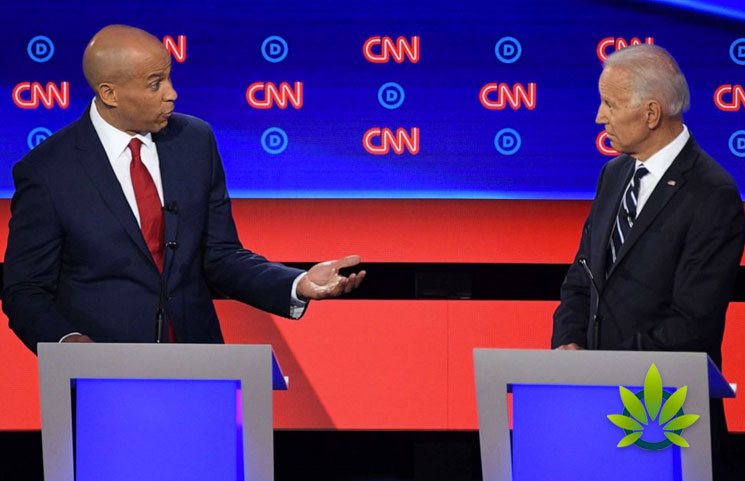 Senator Booker also tweeted to “RT for those who are aware that marijuana is currently legal for privileged persons, and to add one’s name if marijuana should be legal for all.

RT if you know that marijuana is *already legal* for people who are privileged.

Add your name if you believe it should be for everyone. https://t.co/3dxgr3JFVI

During the debate, Biden responded to Booker’s position, stating that “It’s a debate” and that he is seeking a lot more before he legalizes the substance on the national level. He also wants to ensure that “we know a lot more” concerning the science behind marijuana. He also added that he thinks “we should decriminalize marijuana, period” and that “anyone who has a record should be let out of jail, their records expunged, can be zeroed out.”

“It’s a debate, and I want a lot more before I legalize it nationally,” Biden said at the time. “I want to make sure we know a lot more about the science behind it.” -Joe Biden

“But I do think it makes sense, based on data, that we should study what the long-term effects are for use of marijuana,” he said. “That’s all it is.” -Joe Biden

He limited his stance though, by also indicating that he thinks it makes sense, based on data, that there is a need to study what the long term effects of marijuana are. Biden also tweeted his position on Twitter concerning the “misinformation” on where he stands. The tweet indicates that Biden takes the position, among others concerning marijuana use, that no one should be in jail for marijuana use, medical marijuana should be legalized, and states should be allowed to legalize recreational marijuana.

Over the last few days, there has been a lot of misinformation on where Joe Biden stands when it comes to our marijuana laws. Read the facts below. #DemDebate pic.twitter.com/JEgMfuBgLQ