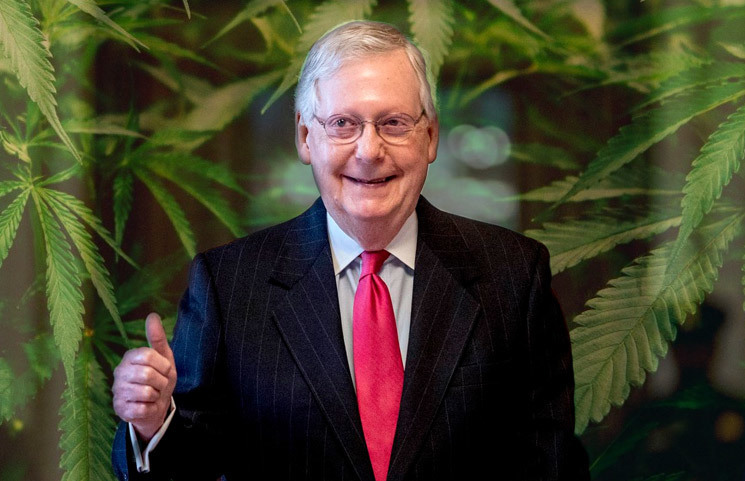 Mitch McConnell, the US Senate Majority Leader, complained in a Thursday floor speech that House Democrats are trying to play “diversity detectives” when it comes to studying the equity in the marijuana industry being included in the latest Coronavirus relief package they have proposed. Agreeing with other GOP lawmakers, McConnell thinks Democrats have partisan demands in the legislation they have filed this week. He didn’t even take into consideration a specific section that protects banks working with cannabis businesses from getting federal regulation penalties.

Minority and Women-Owned Marijuana Businesses Mentioned in the Bill

Referring to the language in which minority and women-owned marijuana companies were proposed to be researched, McConnell said this was the “cherry on top”. Here are his exact words on the policy:

“[…] bold new policy from Washington Democrats that will kick the coronavirus to the curb and save American families from this crisis.”

He continued by saying that the term “cannabis” was 68 times used in the bill, more than the words “job” and “hire”.

Many Republican lawmakers agreed with McConnell and not only on Thursday, but since the House leadership introduced the bill. This indicates the Republican party is strong about the anti-marijuana message. In spite of this, there wasn’t a GOP member to file amendments against the language used in the bill, not before the House Rules Committee has gathered for the Thursday hearing. What should be noted here is that McConnell didn’t criticize the Secure and Fair Enforcement (SAFE) Banking Act, but the study provision.

It’s strange for him to slam the Democrats about this, as he’s the one who advocates hemp and held private meetings with marijuana business owners from all over California back in 2019. He never mentioned anything that he is against the banks collaborating with cannabis businesses, which was the SAFE Banking Act’s main point into the Coronavirus bill.

Cannabis Banking Reform Through the COVID-19 Relief Legislation is Questionable

The standalone Democrats’ legislation includes the slammed diversity study provisions and has 5 Republican co-sponsors. Looking at social media posts from Senate and House Republicans, the marijuana banking reform through the iteration of the COVID-19 relief law is deemed as questionable and attracted a lot of criticism. On Wednesday, Senator James Lankford said the Coronavirus bill sets some change in the federal cannabis law and that it contains too much information about cannabis.