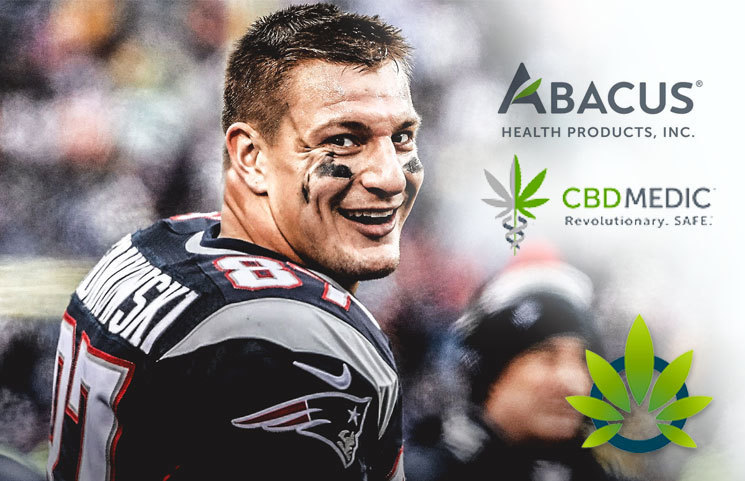 Rob Gronkowski used to be a player with the NFL, but his recent endeavors are leading him to the CBD industry instead. According to reports from FOX Business, Gronkowski has partnered with Perry Antelman, the CEO of Abacus Health Products, to get involved.

Antelman was featured on the show, stating that CBD is able to reduce pain and “calm the nerves.” He spoke briefly about the approval by the FDA to use CBD to treat epilepsy with Epidiolex, stating that the dose was an extremely high concentration to do so. Still, he supports his statements of pain-relieving qualities by saying that there are already “plenty” of scientific studies performed to show this.

Here is the entire Fox Business video clip of Gronk talking about CBD Medic and his CBD use:

The products from Abacus Health are entirely topical, which means that no one has to vape the products to get the desired benefits. Gronkowski jumped in by saying that he wishes that he was able to use CBD while in the NFL, which is likely due to the ban by the NFL. However, to soothe his current pain, Gronkowski pointed out that he uses it now to remain active and participate in recreational sports.

The new product line is called CBD Medic, which Gronkowski and Antelman brought to the FOX segment to showcase. The package, worth $39.99, includes several products, which the twosome attempted to convince the host to try out. However, the package proved too difficult to open to display the actual product.

Both Gronkowski and Antelman were also featured in an interview with Yahoo! Finance, showing the pain relief that CBD Medic can offer. The former is an official investor in this product, while the latter reiterated that the CBD products contain no THC and are not psychoactive. CBD is a natural way to soothe the body, and Gronkowski is passionate about the reaction that he’s had with CBD.

When asked if he was retired from professional football by Yahoo! Finance, he stated, “First off, to come back, you know, they’re gonna have to legalize CBD in the NFL. But I feel like they’re on their way to do it, which will be great.” However, he added that he would have to be “feeling that feel” to come back, and that anything can happen.

Gronkowski says that he left the NFL when the inflammation started getting to him, but the use of CBD is helping to handle that discomfort for his daily life. Although there are rumors floating around the the New England Patriot tightend is plotting his NFL comeback return for week 14, fans and the defending Super Bowl champions will just have to wait and see what unfolds in the coming months.