NFL May Allow Use of CBD and Marijuana by Players, Depending on Scientific Evidence
Advertisement 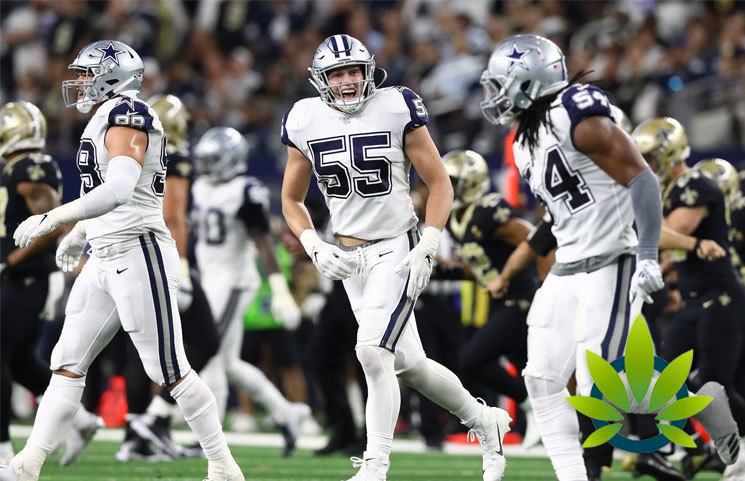 Performance-enhancing drugs have been banned from the NFL for quite sometimes, but there’s much debate over exactly what cannabis can do for the body. Consider the effects of marijuana as a pain reliever and stress soother – should the NFL ultimately change its stance on prohibited the use of the natural substance, based on the recent reports from the Los Angeles Times. Multiple teams and players have refused to answer this question, even though executives with the league have recently spoken on the potential for the use of cannabis as an alternative method of treating pain.

Still, the professional world of football has continually held marijuana on a list of banned substances, even though the public has predominantly been welcoming to the legalization of cannabis. Multiple research studies have even supported the use of this product for soothing many ailments, though pain relief have been one of the most consistently reported effects.

The players that want to be able to use marijuana have mostly kept their use quiet, opting for CBD that is meant to have less than 0.3% THC in order to be sold in dispensaries and online. Roger Goodell, a commissioner with the NFL, announced the efforts to create initiatives for alternative pain therapies last year, he was careful in how he worded his intentions –

“There are a lot of alternative pain medications and treatments.”

Announcing any kind of possible policy shift would be rather premature. As the next season begins, the biggest urgency for changing this policy has come from former players in the NFL, who have commented on the lack of efforts made by the league to help with both pain and brain trauma. Former offensive lineman Kyle Turley stated,

“Everyone knows this game is brutal. Cannabis saved my life, period, and it could help a lot of other players.”

Each of the teams in the league are now required to keep a behavioral health clinician available at the training facility for a minimum of eight hours a week to help players. While the focus on mental health has been a major concern for quite some time, Goodell stated, “We’ve long been focused on mental health but this, I think, takes it to another level.”

A joint committee has already been formed, made up of league and union leaders, in an effort to study issues for therapy for people who have succumbed to injuries. Every single drug that is prescribed to a player, including opioids, will need to be monitored by a pain management specialist, which must be designated for each team. The idea that cannabis could possibly be added to this list of permissible medical alternatives is gaining a lot of attention from the media.

A poll by Gallup last year found that 66% of the people who replied were in support of legalization. With eleven states having already legalized recreational marijuana, and the number of states that allow medical marijuana use is triple that number. However, the chief medical officer of the NFL has already established that the league doesn’t intend to be swayed by the opinions of the public. Allen Sills stated,

“I think that the science, unfortunately, has lagged behind a lot of the popular opinion and press on this. We have a lot more opinion than we do science on the use of marijuana for pain.”

Presently, the federal government has classified cannabis as a Schedule I drug and does not presently have a medical use that is federally accepted. In fact, the federal authorities believe that there’s a substantial potential for abuse. However, the federal ban against cannabis makes the process of researching this substance rather difficult, as they can only access cannabis that comes from growers that already are approved by the federal government.

The National Academies of Sciences, Engineering and Medicine performed a 2017 study, discovering evidence that demonstrated that “the short- and long-term health effects – both harms and benefits – of cannabis use remains elusive.” While CBD demonstrates no psychoactive effects, the academy also discovered that it had the same “elusive” nature as cannabis.

Dr. Donald Abrams, a professor with the UC San Francisco, commented, “It’s complicated. But if players are thinking that cannabis would be useful for pain, there is some evidence to support that.” However, the optimism regarding cannabis isn’t solely based on the medicinal value that cannabis holds.

Dr. Mark Wallace, who works at UC San Diego, commented that he’s experienced positive results in his patients with the use of cannabis. He even states that the use of cannabis immediately after an injury takes place could help the patient to reduce the likelihood of chronic pain at a later time. He continued, pointing out the effect that opioids have had on the country, and that cannabis could ultimately be used as “an alternative.”

ESPN the Magazine conducted a poll in 2016 on the opinion that NFL players have on this matter, reaching 226 participants. Approximately 60% of the players said that they were worried about the long-term effects that painkillers could ultimately have on the body. If marijuana was permissible by the NFL, 61% of respondents indicated that they would be interested in using it as well.

Joe Montana, a quarterback in the Hall of Fame, has so much faith in the industry that he has already invested in a cannabis firm. Chris Long of the Rams has been rather open on the discussion regarding cannabis throughout his career. However, other former professional athletes have gotten involved with these CBD companies as well, including Terrell Davis and Rob Gronkowski. Following his retirement from the New England Patriots this year, Gronkowski stated on one company’s website,

“It would have made a huge difference in my pain management during my career.”

While mental health and the potential for injury continue to be major conversations, the NFL has chosen to work on their player-health initiative by convening with team physicians, athletic trainers, and medical experts. Sills, in a statement last spring, said,

“I think it’s really important that we go where the science takes us here. Not based on personal anecdote or opinion, but what is the medical science.”

Considering the history that the league has with the marijuana ban, advocates have every right to be skeptical of what happens next. Turley, however, believes that there could be progress soon.

He stated, “They only needed to crack the door on this. I think massive things are going to come.”