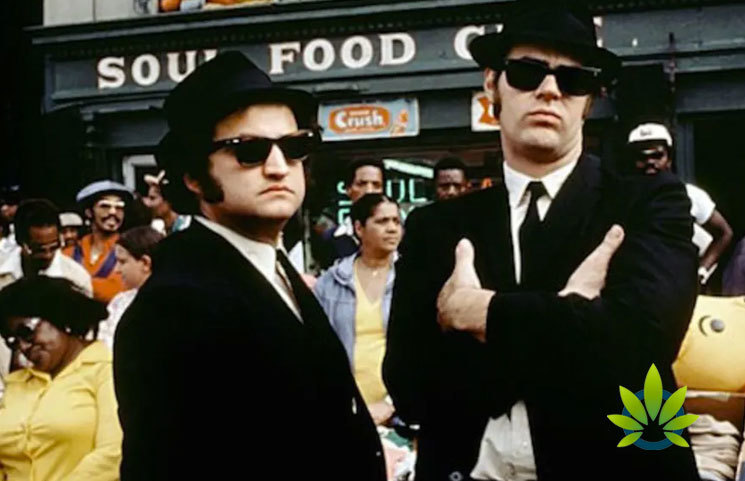 Cannabis brands by celebrities are coming up more frequently lately, and consumers are more than happy to celebrate this trend. While Seth Rogen and Willie Nelson are some of the biggest celebrities to hit the industry, Dan Aykroyd is cashing in as well with a Blues Brothers cannabis brand, collaborating with late actor John Belushi’s widow, Judy Belushi Pisano, and brother, Jim Belushi. On Saturday, the trio announced the official release of a cannabis label named in memory of their hilarious sketch-turned-movie Blues Brothers.

The brand aims to capitalize on the success of the Blues Brothers franchise, which began with Aykroyd and John Belushi on Saturday Night Live in the 1970s as Elwood and Jake Blues. Soon, the excitement surrounding these characters and the late-night sketch became a cult classic with a movie by the same name in 1980. Though John Belushi passed away in 1982, brother Jim joined as a character named Zee Blues to go on tour with Aykroyd.

Jim Belushi, who is another SNL alum and star of According to Jim, has been growing cannabis in Oregon since the state chose to legalize the drug in 2014, now covering a 93-acre farm that was featured on the DIY Network in 2015’s Building Belushi. Now, he is looking to expand his business, hoping to sell in Illinois, where recreational marijuana is newly legal. He also hopes to set up farms in both California and Nevada, and to start a new tv series that would teach its audience about growing cannabis in Oregon. Live Nation has already funded this project.

Belushi has not shied away from speaking about the benefits that cannabis has before, recently quipping to KGW News that one of the strains is known as the “marriage counselor” for its ability to bring man and wife together. However, he doesn’t see cannabis as a contributor to drug addiction, but as a solution. Though his brother John had died from an overdose of opioids, Jim strongly believes that he would be alive if he “was a pothead,” rather than an opioid addict.

Aykroyd, on the other hand, owns the Lakeview Wine Co., which is based in Niagara, Ontario. As these individuals collaborate on the new brand, they are hardly the first celebrities to do so. Infamous duo Kevin Smith and Jason Mewes of the Jay and Silent Bob movies have announced their own strains of marijuana, influenced by the cannabis in Jay and Silent Bob Reboot.

The perk of using one’s celebrity in the cannabis work is the fact that they automatically get the trust from consumers, as they’re relatively well known for their affinity for marijuana. Snoop Dogg, for example, has launched his own strain called Leafs by Snoop, and he is widely known for his use of the psychotropic substance.

Speaking with The Cannabist, Snoop commented,

“Since I’ve been at the forefront of this movement for over 20 years now, I’m a master of marijuana. So naturally, my people can trust that I picked out the finest, freshest products in the game.”