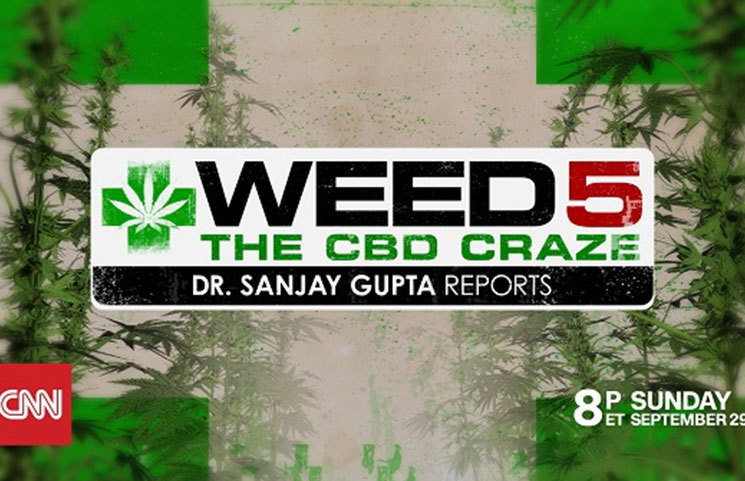 Dr. Sanjay Gupta made a point to investigate exactly what he could find out about medical marijuana scientifically about six years ago. Within a year of starting this project, he brought to life the first documentary of a series called WEED, which aired on CNN at the time. It included an op-ped by Gupta titled “Why I Changed My Mind on Weed.” On September 29th at 8:00pm EST/PST, the fifth installment – WEED 5: The CBD Craze – will premiere, following Gupta as he goes back to where he journeyed originally to Colorado.

Before long, CBD will become an industry worth $22 billion, and it can already be found anywhere, from dispensaries to the grocery store. Products like lotions, lattes, pet products, drinks, and more can be found anywhere CBD is allowed. Dr. Gupta, in this series, will now set out to shed more light on the truth behind this craze. Back when the famous doctor broke the original CBD story, it featured the likes of Charlotte's Web among many others in 2014.

The public already knows that CBD cannot create the same “high” sensation that THC will, but there isn’t a lot more information that is known about the substance. Research is minimal right now, but there are many stores from consumers all over the country that show how this product has helped. In WEED 5, Gupta focuses on the CBD industry, and explores the dangers of the unregulated market.

The new installment of the docu-series will be available to stream on the same day of its premiere at CNN.com/go, as well as on the CNNGo apps found on Apple TV, Roku, Amazon Fire, Samsung Smart TV, and Android TV. Consumers can also view the broadcast on the CNN mobile apps on Android and iOS devices, or through cable/satellite systems on the day after the broadcast.