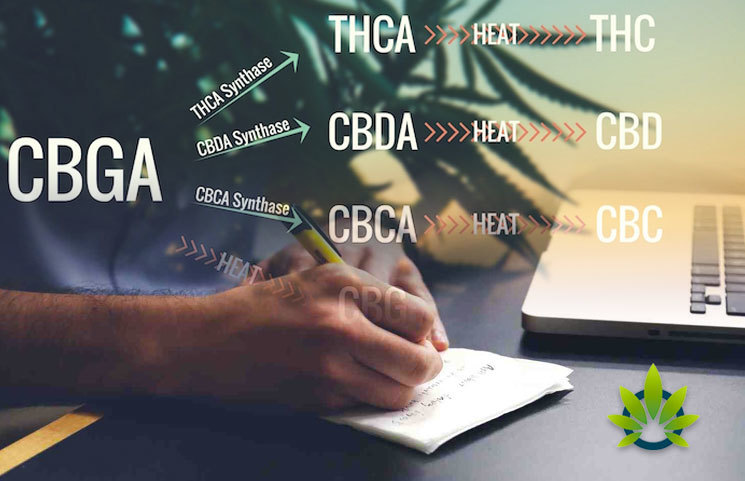 The most popular cannabinoids in cannabis are THC and CBD. Yet, these aren’t the only ones. Research has shown that there are currently 113 cannabinoids and counting in the plant. One of these is called Cannabigerolic Acid (CBGA).

This mostly functions by protecting the cannabis plant, and improving its growth yield. How? By simply eliminating unnecessary leaves so that the plant’s flower can get all the energy and nutrition that it needs. Think of it as an efficient, natural pruning system that ensures improved crop yield.

A fundamental compound found in cannabis flowers, it’s often considered the “grandparent” of cannabinoids. Why? Because it’s the cannabinoid that triggers the production of three key cannabinoids:

All three cannabinoids are important in the cannabis plant because they eventually go on to become CBD, THC and CBC. Of course, CBGA may also drop the acid to become just CBG, but ultimately, it eventually breaks down and transforms into the common cannabinoids, CBD and THC.

The History of CBGA

If you fancy a bit of cannabis history, then this should interest you. It was identified in the late ‘60s. As a result, knowledge of it has been in circulation for the last five decades.

Unfortunately, the research on the cannabinoid have been few. Which is actually surprising seeing the crucial role it plays in formation of other important cannabinoids. The bulk of the research about it has been primarily concentrated on how to sustainably produce THCA.

This compound is used in a lot of research and pharmaceuticals. So, it’s been mostly geared towards ensuring that there’s no shortage of the compound by finding faster ways to convert the compound into CBGA.

All that research has produced good results. For instance, scientists have found a way to replicate the compound in Pichia patoris –a yeast species- and do it at scale. As a result, these studies have indicated that it can be produced in not just hemp plants, but also yeast.

What are the Possible Benefits of CBGA?

To reiterate, studies on its application and use are scarce. However, the earlier research proved that it might have some potentially great health benefits. These include:

Cardiovascular disease is usually the outcome of a condition known as metabolic syndrome. All those who have this syndrome tend to be overweight, obese, diabetic, and predisposed to a bunch of comorbidities. Studies have shown that CBGA could help diabetics who are predisposed to CVD, so they don’t develop it.

Studies carried out on the compound showed that it helped with inhibiting the production of an enzyme called aldose reductase. This enzyme is commonly linked to prolonged oxidative stress, which in turn triggers heart disease.

While the studies were in-vitro, it was clear that it could be potentially useful in the prevention of CVD is diabetic individuals. Of course, the results were largely dependent on the dosage of CBGA.

However, this is possible good news because most drugs that inhibit this enzyme tend to have significant negative side effects. CBGA’s potential as a solution with minimal or zero side effects is quite promising, and one scientists ought to look into.

Could Help With Metabolic Conditions

Of particular interest, is a 2019 report about a computer simulation. This simulation was targeted at examining CBGA’s capacity in the activation of peroxisome proliferator activated receptors (PPARs) that aid the regulation of bodily metabolism.

In case you didn’t know it, PPARs play a crucial role in preventing metabolic ailments like high cholesterol levels and diabetes. So, when they’re absent, the body tends to start developing these conditions.

The study showed that CBGA was effective in activating these receptors resulting in a healthier metabolism and less predisposition to those conditions. Of course, this was a simulation.

The next thing to do would be to carry out trials involving animals and humans to test the hypothesis and see if the simulation was actually correct.

Another promising benefit of CBGA lies in its potential to combat colon cancer. This is important considering that colorectal cancer is the 3rd most common cancer and the 4th leading cause of cancer related death.

This promising study still needs to go to the experimental stage, followed by clinical trials. But, if it pans out, not only could CBGA be used to wipe out colon cancer, it might be able to stop the production of polyps, which often become cancerous when left unchecked.

CBGA has such incredible potential that one wonders why there isn’t ample research on it. But, the reality is its application still seems rudimentary. While there have been folks who claim that it works, the reality is these claims are sketchy and unreliable at best.

Until it can be harnessed at scale and deployed in such a way that it can target ailing cells, all we have is just assumptions and hope of a possible application in the future. Whatever the case, if you’re looking to experiment with it for your condition, you should clear with your doctor before going ahead.