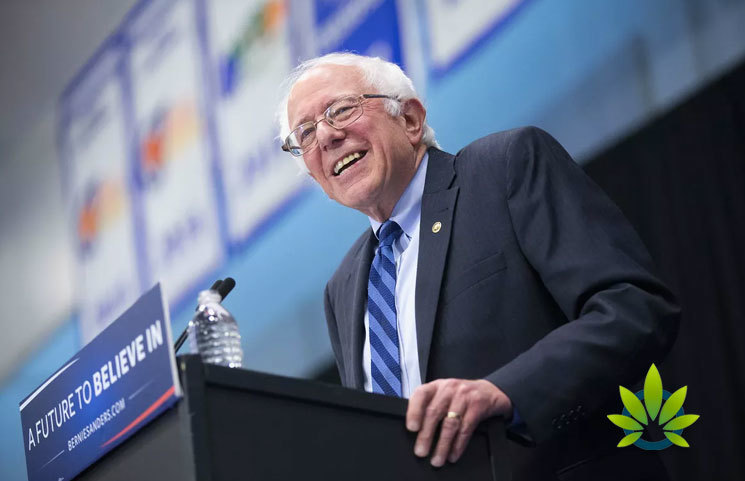 Sen. Bernie Sanders has a plan worth $50 billion to support new business and push along the cannabis industry. The plan is the most progressive and bold of all of the democratic candidates. The Democratic Party has yet to choose their nominee for the election, but each candidate is working to establish itself as a frontrunner.

In his efforts to gain more votes, Sen. Bernie Sanders recently revealed his plan to make cannabis legal at the federal level, while expunging the criminal records for marijuana offenses. His announcement was made at 4:20pm, seemingly in homage to the traditional “holiday” for cannabis smokers. As Sen. Sanders sees it, this is the time for a new drug policy for the public. He stated:

“We’re going to legalize marijuana and end the horrifically destructive war on drugs. It has disproportionately targeted people of color and ruined the lives of millions of Americans.”

The proposal that Sanders is setting forth is the most aggressive of any other candidate. Sanders promised to “end the greed and corruption of the big corporations,” aiming to make the Americans with the greatest damage from these drug policies the first to see progress.

To address the former convictions on record, Sanders aims to implement a federal clemency border, instructing the authorities at all levels to review the qualifying cases, while determining if it is best appropriate to establish a new sentence or a vacated conviction is best. The decisions can be appealed by a prosecutor within a year, though the convictions would be vacated or expunged after that time. The plan also states that tobacco companies cannot enter the cannabis industry, and that there would be prohibitions against marketing to or making products for children.

The taxes that legal cannabis sales bring in would go towards a massive grant program for entrepreneurs of color ($20 billion) and a program that would “focus on businesses that are at least 51% owned or controlled by those in disproportionately impacted areas or individuals who have been arrested for or convicted of marijuana offenses” ($10 billion). The plan allocates another $10 billion in a USDA grant program that would focus on individuals that were arrested for marijuana offenses, as well as $10 billion for a development fund, supporting “communities hit hardest by the War on Drugs.”

Sanders has continually been an advocate for the legalization of cannabis. While at a campaign event in September in Iowa, he stated that he wanted the legalization plans to include provisions that could support small businesses, preventing a monopoly by bigger players.

He commented, “I go to Nevada, and there are these big billboards, I don’t know if you’ve seen, and it says buy this or that brand of marijuana, have you seen this? They are advertising hemp. And I’m thinking that there are people in jail for doing exactly what these large corporations are doing, selling marijuana.”

Every one of the major contenders to secure the Democratic nomination have some kind of cannabis reform plan and support, though the degree of that support varies. While Sanders and Elizabeth Warren have both stated that they would take executive action to legalize marijuana, they were joined by Sen. Cory Booker, Sen. Kamala Harris, and Sen. Michael Bennett in the endorsement of the Marijuana Justice Act.

A similar notion was made by former Rep. Beto O’Rourke, who plans to legalize marijuana and also fund expungement with taxes. However, Vice President Joe Biden is taking a much more restrictive stance on the topic, stating that cannabis should only become a schedule 2 substance, rather than a schedule 1, and that marijuana should only be considered a misdemeanor.