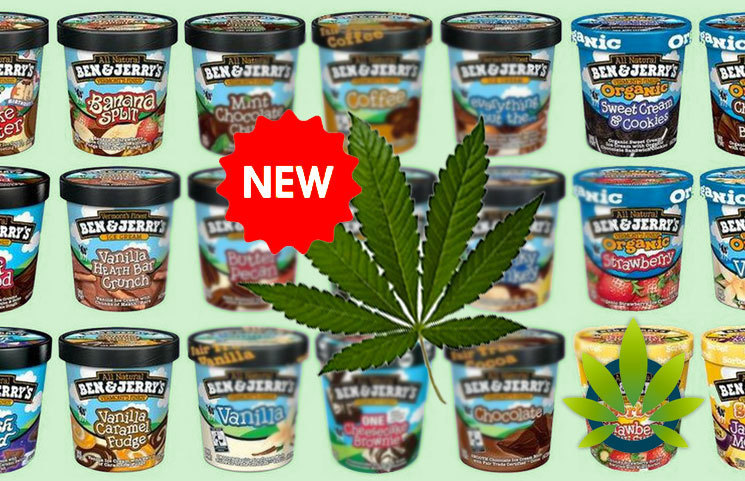 Currently, the FDA prohibits food and beverage manufacturers from adding CBD to products. However, that may change in the near future: the FDA has set a public hearing on the legalization of CBD in food and beverages for May 31st, and Ben & Jerry’s has submitted a comment on the issue.

While Ben & Jerry’s waits for the FDA to decide, the company is clearly capitalizing on the hype by releasing mock-ups of its potential CBD-infused ice cream.

“We’re doing this for our fans,”

“We’ve listened and brought them everything from Non-Dairy indulgences to on-the-go portions with our Pint Slices. We aspire to love our fans more than they love us and we want to give them what they're looking for in a fun, Ben & Jerry's way.”

It comes as no surprise that Ben & Jerry’s has adopted a pro-CBD stance. The company has previously released flavors like Half Baked & Magic Brownies. Earlier this year, Ben & Jerry’s also used its social media following to advocate for the release of non-violent drug offenders – including the millions of Americans locked up nationwide for carrying or selling marijuana. Given the company’s recent actions, it seemed inevitable that Ben & Jerry’s would release a CBD-infused ice cream.

Ben & Jerry’s plans to source its cannabidiol sustainably from Vermont. Sustainable sources are part of the company’s “Linked Prosperity” model along its supply chain, where Ben & Jerry’s strives to make a positive impact upon every community it touches.

Previous benefactors of the Linked Prosperity model include Greyston Bakery, which uses an open-door hiring policy and provides Ben & Jerry’s with its brownies, along with Rhino Foods, which hires refugees and uses local dairy while providing cookie dough to Ben & Jerry’s.

Ben & Jerry’s officially became a certified B Corp (Benefit Corporation) in 2012. In recent press releases, the ice cream giant has also called itself “an aspiring social justice company” that “believes in a greater calling than simply making a profit for selling its goods.”

The early mock-up shows a traditional pint-sized Ben & Jerry’s-style ice cream container with varying shades of green and a large ‘CBD’ emblazoned on the front. The words ‘CBD TBD’ are featured across the container, suggesting that future details are “to be decided” in the future.

It’s also not clear if Ben & Jerry’s has already produced its cannabidiol ice cream in its factories, or if they have simply created some test batches or none at all.

The FDA will debate the legality of CBD in foods and beverages on May 31. However, it will likely take months – even years – before you can buy a product like CBD-infused ice cream on store shelves.