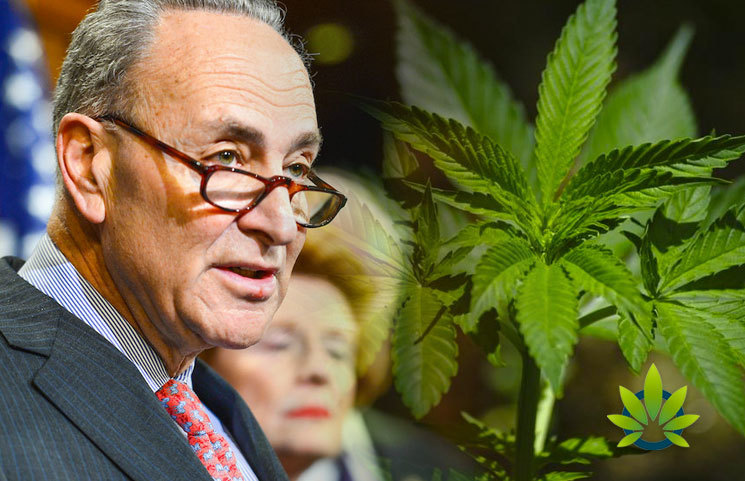 The cannabis industry in the United States has been rich with difficulties throughout its time, and one of the big issues has been the lack of banking opportunities in this sector. As cannabis is federally illegal, most banks will not offer banking services, leaving dispensaries and other state-legalized businesses to accept cash only or seek out alternative payment options. While there is a cannabis banking bill being reviewed that could help with this one concern, Sen. Chuck Schumer believes that there is still so much more that the federal government could and should do.

On Thursday, Schumer posted a tweet that called for “decriminalization at the federal level,” as well as reformation of the criminal justice system and new opportunities for small businesses owned by minorities and women. In fact, he goes as far as to say that Congress shouldn’t simply enact the new bill and “think the job is done.”

.@RepAOC and these civil rights groups are right.

Congress should not enact banking reform alone and think the job is done.

We need decriminalization at the federal level, criminal justice reform, and investment in opportunity for minority & women-owned small businesses. https://t.co/PM22Bmk5Pl

Schumer added that there are many civil rights groups that want the planned vote on the financial services legislation to be held off. The organizations, which include the ACLU, Human Rights Watch, and Drug Policy Alliance (among others), are worried that the passing of the banking bill will push broader legislation efforts aside that would otherwise be focused on ending the federal prohibition on marijuana.

Schumer’s post, which he had quoted Marijuana Moment in, mentioned Rep. Alexandria Ocasio-Cortez. This Thursday, she had commented that she shares the groups’ concerns.

To be clear, Schumer didn’t say directly that the banking vote should be entirely called off before the broader reform happens. Instead, he noted that the job is far from over, and that he agreed with groups that are hoping for delays. However, House Majority Leader Steny Hoyer already announced intentions to bring the legislation to the floor before this month is over, and leaders plan to use a suspension of the rules to expedite the process. This process only requires 290 votes, or two-thirds majority, to pass.

At this point, the legislation has 206 cosponsors signed on, and the chief sponsor of the Secure and Fair Enforcement (SAFE) Banking Act – Ed Perlmutter – has already moved for changes to the legislation. Ultimately, the amendments would likely bring in more GOP votes. The series of changes would include banking protections for hemp and CBD companies, as well as preventing the regulators in the financial industry from targeting certain industries as being at a higher risk for fraud, which could sway Republicans. Still, for the most part, this legislation has been fairly bipartisan.

At the Senate, the bill will likely see a much tougher road. Majority leader Mitch McConnell has already supported the enactment of hemp legalization last year. However, he calls marijuana the “illicit cousin” of the crop, so it won’t likely see any of his support. Mike Crapo, the Senate Banking Committee Chairman, took a surprising approach, stating this month that he was planning on a vote for the cannabis banking legislation in his panel, hoping to make this happen before the end of the year.

Rep. Maxine Waters, who is the chair of the House Financial Services Committee, stated that she understands the concerns that advocacy groups have about this baking vote. However, the legalization bill by Judiciary Chairman Jerrold Nadler has been stuck without advancing, which means that the Democrats in the House are essentially tied. Waters commented, “[W]hat’s going to happen is Mr. Perlmutter’s bill that gives safe harbor to the banks is going to move, and whenever Judiciary gets that bill done, then it’s going to move too with the same kind of support that Mr. Perlmutter’s bill is going to get.”

One of the groups that signed the letter for stopping the banking vote, the Leadership Conference on Civil and Human Rights, expressed gratitude over the comments from Schumer. The group added that broader reform legislation should be considered in an effort to “address marijuana prohibition holistically and inclusively.”

House leadership MUST delay any vote on #HR1595 until there’s an agreement on broader marijuana reform. https://t.co/czMCX1zBK3

A separate bill was filed by Schumer in May, aiming to deschedule cannabis entirely, while eliciting participation in the industry from communities that have been the victim of the effects of prohibition.