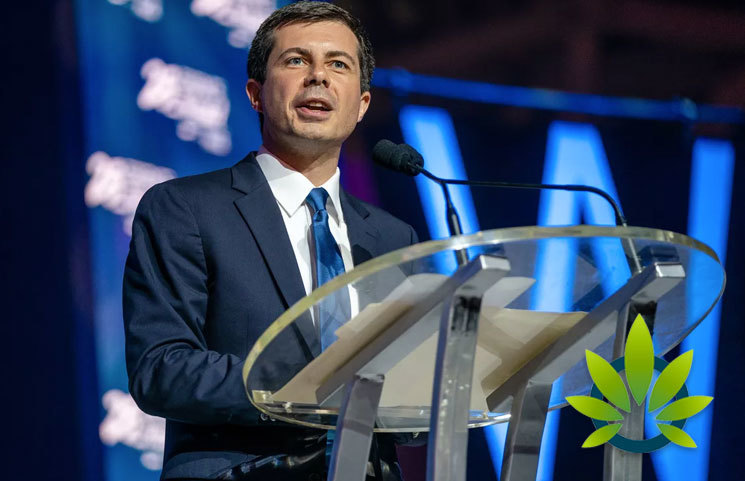 The next election for president will commence in 2020, and Democratic candidates are all working to set themselves apart, hoping to earn the Democratic nomination. The legalization of cannabis is supported by all but one of the Democrats hoping to take office, but Indiana-based Mayor Pete Buttigieg is taking his commitments a bit further. On Friday, Buttigieg released a plan that focuses on “decriminalizing all drug possession,” which would take place in his first term as president to fight against the opioid epidemic. It also positions addiction as a public health concern, rather than simply an issue for the criminal justice system.

However, decriminalization is just one of the many options that Buttigieg would focus on to reform the mental healthcare system, offering substance abuse treatment. The plan also proposed reducing the sentences that are currently imposed on drug offenses, apart from possession. He would be making naloxone, the overdose reversal drug, more widely accessible, and would establish syringe exchange programs across the country.

America’s addiction and mental health care crisis has been building for decades—due to decades of neglect by political leaders in Washington. Today, I’m proposing a new approach that tackles this crisis with the urgency and care it deserves. pic.twitter.com/U8F9DXJPC2

The “Healing and Belonging in America” plan focuses on the need to handle drug offenses with treatment, rather than months and years in prison. With new programs for diversion and better training for “drug courts, mental health courts, and other alternatives to incarceration for justice-involved persons,” Buttigieg feels confident in the potential success of ultimately reducing incarcerations related to mental illness and substance abuse by nearly 75% within the first presidential term.

Our country is in the midst of a mental health and addiction crisis, worsened by decades of stigma and political neglect. I’ll bring a new approach, rooted in commitment and community, to tackle this crisis with the urgency it deserves. https://t.co/spBoh5KH4X

For offenses other that possession in this plan, Buttigieg would apply this sentencing reformation retroactively, and convictions prior to his presidency would be expunged.

Buttigieg referenced studies to support his statements that a prison sentence is much more likely to reduce in overdose death than to act as a deterrent for “drug misuse, drug arrests, or overdose deaths.” More directly, he stated, “We cannot incarcerate ourselves out of this public health problem.”

The proposal indicates that Buttigieg plans to decriminalize conditions related to mental illness or substance abuse, pushing these individuals to be treated by a health professional, rather than incarcerated for their crimes.

Harm reduction policies also hold significant weight in Buttigieg’s proposal, aiming to expand take-home naloxone programs to every state by the end of his first term. The services would be expanded for the purpose of reducing “overdose deaths and the spread of infectious diseases related to needle sharing.” Naloxone would become “broadly available,” and there would be no restrictions for using funds from the federal government for “syringe service programs.”

Buttigieg feels that the funding for the purchase of this medication at state and local health departments should come from the federal government. He added that it would also fall on the responsibility of the federal government to ensure that this medication can be accessed in the workplace and other public places, much like first aid kits. The government should also encourage naloxone to be prescribed at the same time that patients are prescribed opioids for their pain, whether the pharmacist provides it or if it is prescribed by the physician.

Syringe exchange programs are difficult to establish, due to federal regulations presently in place, since these funds cannot be used for the purchase of needles. However, the plan states that these restrictions only place strain resources and “convey a negative message about the value of these programs.” There is also scientific evidence to suggest that simply having these exchange programs available could ultimately prevent transmission of HIV and hepatitis, which can both be spread through the use of dirty needles.

Buttigieg added that the Centers for Disease Control and Prevention would play a role in these programs, as they would need to “remove any criminal liability for those participating in” the syringe exchange programs. To fight the drug crisis, harm reduction programs need to be implemented, since they allow consumers to protect themselves from the potential spread of disease, but do not promote the continued addictions.

While Senators Bernie Sanders and Elizabeth Warren both have proposed the legalization of safe injection sites, which would allow individuals to use their illicit drugs with medical supervision, this harm reduction policy was not included in Buttigieg’s plan. The suggestion of these sites for Sanders and Warren were part of their criminal justice reform plans, though Buttigieg expressed that too many people with mental illnesses and addictions end up in jail anyway, keeping them out of treatment facilities. Through all of the efforts that Buttigieg wants to make into realities, it is clear that he is focuses on the treatment and rehabilitation of these offenders, rather than pushing them back into the prison system.

The plan doesn’t directly describe the efforts as the “decriminalization” of drugs, though there are many advocates of these programs that commonly use the term. Instead, Buttigieg is taking the path of healing, which is something that the United States is in deep need of.