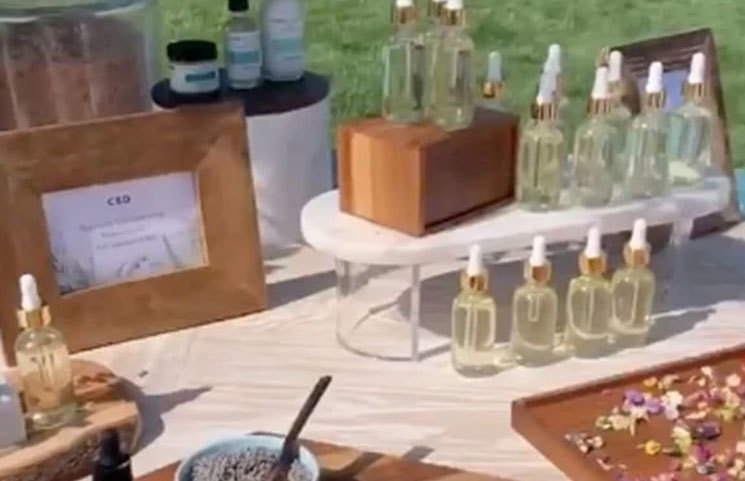 Baby number four is on the way for power-couple Kim Kardashian and Kayne West. During the couple’s baby shower, the theme was a hot yoga study so that guests, and Kardashian, could zen out.

According to a Huff Post article, Kardashian is quoted as saying, “So, because I’m freaking out and the baby is coming in, like two weeks, I thought what better way to celebrate than to have a little CBD.” Guests were offered south baths, massages, and CBD-infused goodies such as body oils, salts, and much more. Kardashian also stated, “I thought it was kind of ridiculous to have a fourth baby shower. But I thought I’m freaking the f*ck out having a fourth kid. So everyone have a puff and put on some oil.”

Allegedly, the choice brand of CBD at Kim Kardashian’s baby shower was Aurora Cannabis. According to an April 25 article by Markets Insider, investment app Robinhood, “420,000 users own the marijuana stock Aurora Cannabis.” The article continued, “The reason for Aurora’s popularity is not clear, although it does have the lowest nominal stock price of the major cannabis companies, potentially increasing appeal.”

E! News reported hearing something interesting from Kim Kardashian on her upcoming baby shower. The Carolina Lemke x Kim Kardashian West designer shared with E! News that “This year, because I am freaking out so much, I just want a zen-like CBD-themed baby shower.”

She also discussed a few details on what she hopes to have at her baby shower, stating that “I just want massages, I want to do like a tea ceremony with crystals and we’re going to have a drink at this baby shower – we’re not pregnant.” That’s right – the star has a surrogate for her fourth child.

She shared some information on the surrogate experience with Entertainment Tonight, stating “I love my surrogate, we have a really good relationship. I really trust her and I definitely see, like, the first time that I went through it, I was a little bit more anxious, and texting more and calling more, and I feel like my surrogate this time around, really is such a protecting person and I really trust that in her.”