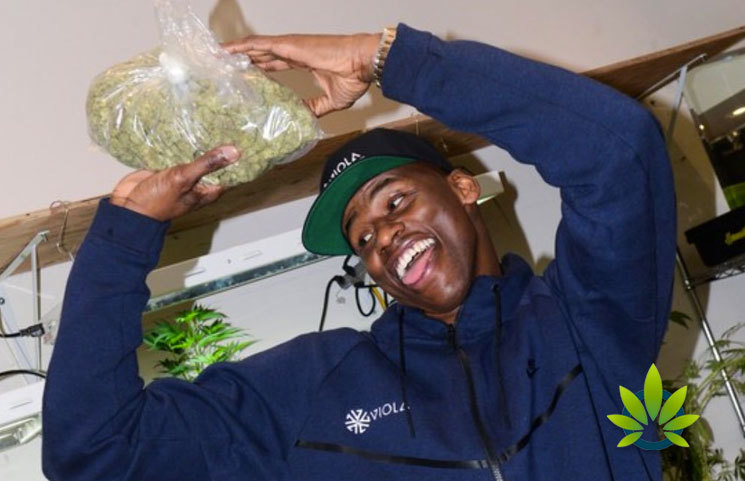 Al Harrington had not used marijuana as a child as a result of the fear-mongering style of the War on Drugs. His company aims to support communities by dedicating a part of his company’s proceeds to children.

Al Harrington has been in the marijuana industry for a while and has expanded his CBD company – Harrington Wellness – to five states already. The former Denver Nugget has pushed the company to grow both domestically and internationally. Recently, the 39-year old spoke with Cheddar to discuss the upcoming plans for his company and the cannabis industry.

Cheddar calls Harrington a “marijuana mogul,” noting that he had not previously used marijuana before the company officially launched. The New Jersey native was “scared to death” of using marijuana, as he grew up in a time where the War on Drugs was booming. Between his time in school and at church with family, marijuana was toted as the “gateway drug” that could eventually lead down some troublesome roads, which any child of the 1980s and 1990s probably remembers.

It wasn’t until Harrington was an adult in the NBA that his perspective on marijuana started to change. He commented that he would see and hear about teammates using cannabis, leading him to eventually decide that “the stigma is not the truth.”

Al Harrington credits his grandmother as the inspiration for beginning his business, who was 79 years old when she came to watch him at a Denver Nuggets game. She started complaining about her struggle with glaucoma, and Harrington remembered a news article that he had read shortly before that discussed the benefits of cannabis use for glaucoma sufferers. While it took a few days of convincing, Harrington was able to get his grandmother to use cannabis to help her, and she was able to read her Bible for the first time in three years on that day.

The entrepreneur was inspired to learn more, bringing him to launch the Harrington Wellness brand that the public knows today. However, Harrington wants to expand, and his cannabis company is presently working on licensing in New York. Viola, Harrington’s cannabis company, already offers flowers, vape pens, and extracts, but they are looking to support the community with their work.

Harrington said, “We’re changing our company moniker to ‘one flower at a time, one community at a time.’”

Ultimately, a portion of the proceeds will be going into the kids in these areas. One of the hosts points out that a major issue in New York is that that local government found cannabis disproportionally affecting communities of minorities.

With the work Harrington is doing, he is hoping to support these areas instead. Recently, he travelled to Albany and the local lawmakers were surprised to see a company run by a man of color, but Harrington sees his company as a way to allow these entrepreneurs to compete. He supports lower fees for entering the market in these lower-income areas, hopefully creating a way for newcomers to enter the space legally and with healthy profit margins.

While THC isn’t necessarily for everyone, CBD is non-intoxicating, giving it a much better reputation in the industry. Harrington believes that the topical products are easier to gain acceptance for, as users are unlikely to test positive for drug use. Opioid addiction is a very real problem, especially in the world of professional sports, and some athletes have even likened the distribution of these pills to that of passing out candy. CBD is not addictive and doesn’t cause the same psychoactive effect as what THC offers, which gives pro athletes a chance to treat themselves without hurting their body internally over time.

The expungement of non-violent drug-related offenses were discussed as well, as so many individuals find job placement to be a difficult struggle after being charged or incarcerated. Harrington remarked:

“You think you go to jail and serve your time, and you come home and you’re still a felon. You still can’t participate. You can’t get a good job.” Even if a record is expunged, Harrington stated that there needs to be a way to “right that wrong.”