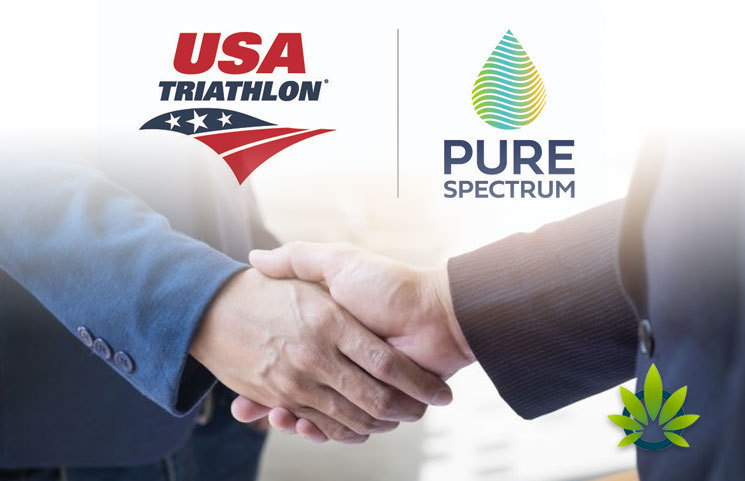 From 2013 to 2018, interest in the Olympics dropped by 25%, years after the USA Triathlon was added. Multiple sports organizations already have collaborated with CBD companies, like CrossFit and the Ultimate Fighting Championship.

While THC is the intoxicating compound that is attached to the stigma of getting “stoned,” CBD provides the therapeutic effects but without being intoxicating. CBD is legal at the federal level and was removed from the list of banned substances of the World Anti-Doping Agency last year. By removing CBD, WADA now creates an opportunity for the endorsement and use of CBD for elite athletes. The substance has been praised for its ability to eliminate pain, inflammation, stress, and even anxiety. Consumers are able to purchase this product from nearly any store, and in a multitude of different forms.

In the new four-year deal between the USA Triathlon and Pure Spectrum, very little is known to the public. However, it follows the passing of the Farm Bill by less than a year, which made it possible for CBD to be legal after many years of being criminalized. Many organizations in the sports industry have been careful in their use of CBD, since there’s still little research behind it.

“USA Triathlon’s exclusive deal with Pure Spectrum will help the relatively small national governing body support growth of the sport while trying to keep fees for races and other costs associated with the triathlon at a reasonable level.”

From 2013 to 2018, the membership with this event dropped by about 25%. Though interest rose again when the USA Triathlon was added to the Olympics in 2000, it declined for many reasons. Boosters stated that some of the trends have been reduced, as nearly 15% of the annual revenue comes from sponsorships.

Many athletes have already embraced the use of CBD, regardless of their level of use. The chief executive of the USA Triathlon, Rocky Harris, stated that the voices of participants have been the driving force behind the organization to examine the risks and benefits of CBD use. Their research has also included the potential of making money with a sponsorship deal. Harris stated, “We needed to be able to say if you use this product you will not fail a drug test.”

Right now, other sports organizations have already formed relationships with a CBD company, like the Ultimate Fighting Championship and CrossFit. However, the privately-controlled athletic organizations like the American sports leagues have the choice of making their own rules regarding drug policy. The reason that the USA Triathlon became comfortable with the partnership with the CBD company has a lot to do with the latter’s control of their manufacturing processes. These processes ensure that there is no THC inside their products, which include lotions, oils, and tinctures. While the brand previously had sold vaping products, these sales ceased last week amid the lung illnesses arising across the country.

“I understand what these athletes go through on a daily basis, from the stress leading up to a competition, or training, the breakdown their bodies experience. What better market to prove this on than on the most healthy and educated athletes?”

There have already been many athletes and famous names in sports that have already voiced support for CBD and CBD companies, like Steve Kerr, John Isner, Bode Miller, and Bubba Watson. However, since it is difficult to determine if a CBD company has actually followed the requirements of holding less than 0.03% THC. As a result, athletes unwilling to risk their careers opt for the legal prescription drugs given by team doctors.

Doping officials no longer test for cannabis unless during competition, and the recreational use penalties are much lower than they used to be.

That being said, Harris pointed out:

“Athletes prefer not to take prescription drugs. They want organic and healthy. They want to find something more natural.”