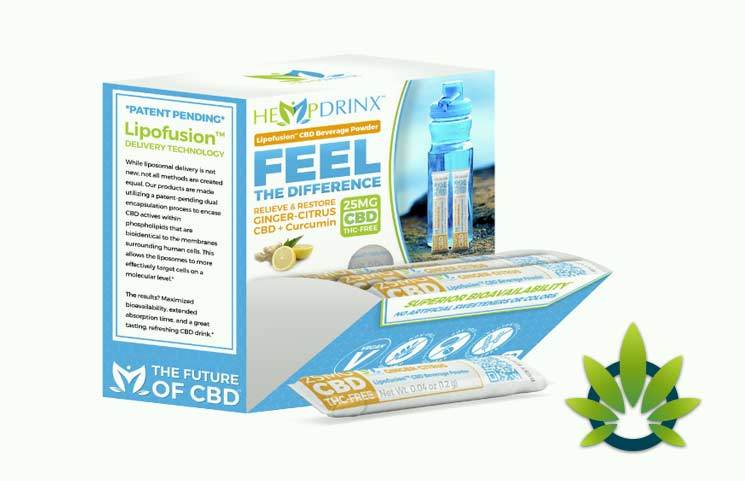 Cannabidiol (CBD)-infused waters and beverage powders are shedding light on the different ways of enjoying CBD. Sure, oils and tinctures were the foundation of reintroducing cannabis-based medicine, as many success stories of relieving anxiety, body pain and seizures were elemental in reconsidering its likes. But at the end of the day, if something can improve one’s health without being distasteful, why not right? This is where Hempdrinx comes into play.

Hempdrinx from Bemor proclaims itself as a CBD-focused brand that aims towards delivering results. In addition to the attention placed on CBD, the brand has since focused on other aspects such as taste, nutrients delivery and its overall bioavailability – all of which play a role (some more over others) in bringing relief and kickstarting one’s day.

The following review will look closely at Hempdrinx with respect to its aim(s) and types of beverage powders offered.

Hempdrinx has been described as a line that develops on flavorful and effective CBD essentials. In particular, the line consists of CBD beverage powders which contain hemp-derived CBD, specific vitamins and a flavor that will leave consumers enjoying its overall consumption.

The foundation of Hempdrinx doesn’t simply rest in the source of CBD used, which has been deemed US-made, vegan and THC-free, but also on the reliance of technology. More specifically, it is Hempdrinx use of a patent pending dual encapsulation technology that is said to be responsible for creating a drink that is enjoyable and beneficial to one’s health.

As per the claims made, said technology helps to hide the unpleasant taste CBD within a double membrane of lipids, which are deemed similar to brain foods that enhance its overall function. Also, it works to increase the body’s bioavailability and absorption levels for optimal results.

Currently, the CBD beverage powders come in two types and flavors, each designed for specific purposes. Here is a breakdown of what consumers can expect from both, which in turn will help to decide on what will satisfy one’s immediate needs:

The Energy Boost can be thought of as an alternative to coffee, green tea and other types of energy-inducing drinks. It is currently offered in passion fruit flavor and contains as little as 5 calories per serving.

Each serving is said to be equivalent to 25mg of CBD, 100mg of vitamin C and 1000mcg of vitamin B-12. The addition of vitamins B-12 and C are praiseworthy given that they are among the best vitamins known to boost one’s energy levels, while offering fast healing. In particular, vitamin B-12’s role is to deliver energy from food to the necessary cells!

As for its suggested uses, consumers are recommended to take one packet of the Energy Boost with 8 to 12 ounces of water 15 to 20 minutes prior to eating. Taking it on an empty stomach is more effective in bringing results, otherwise, the wait time for the effects of CBD to be felt may prolong.

As the name of the beverage powder, Relieve and Restore has been created with the sole purpose of gradually decreasing one’s chances of dealing with pain and inflammation. The drink is currently offered in a Ginger Citrus flavor, which isn’t surprising considering ginger’s natural anti-inflammatory properties.

What differentiates Relieve and Restore from Energy Boost is the additional ingredients, where the former contains curcumin as opposed to vitamins B-12 and C. Curcumin is a compound found within the turmeric plant, just like CBD is a type of cannabinoid compound found primarily in hemp. It is widely known for its anti-inflammatory and antioxidant properties. Some of its abilities include fighting off free radical damage and bacteria from the body on a molecular level as well as enhancing one’s brain function.

Based on the analysis above, one can arrive to the conclusion that Hempdrinx is a viable option when it comes to picking from multiple CBD-infused beverage lines. Some of the reasons why Hempdrinx carries value is first, their source of CBD, which is deemed US-grown and third-party tested. In addition, the fact that it is THC-free is surely to bring relief to many consumers – as THC is widely known for its psychoactive effects.

Second, along with CBD’s anti-inflammatory, antioxidant, antifungal and anti-bacterial properties, natural alternatives to said properties have also been included to make each serving positively impactful to one’s health. Next, their use of technology, which work in ameliorating the drink’s taste factor as well as the body’s ability to absorb the CBD concentration and added vitamins are fundamental to the existence of this respective drink.

Lastly, to ensure the drink is pure, preservatives were omitted, which only goes to show the level of care placed in maximizing the strength of CBD per serving as well as one’s health over the long run. Unfortunately, the beverage powders are not sold directly to consumers. To learn how one can get hold of Hempdrinx, go to: hempdrinx.com/