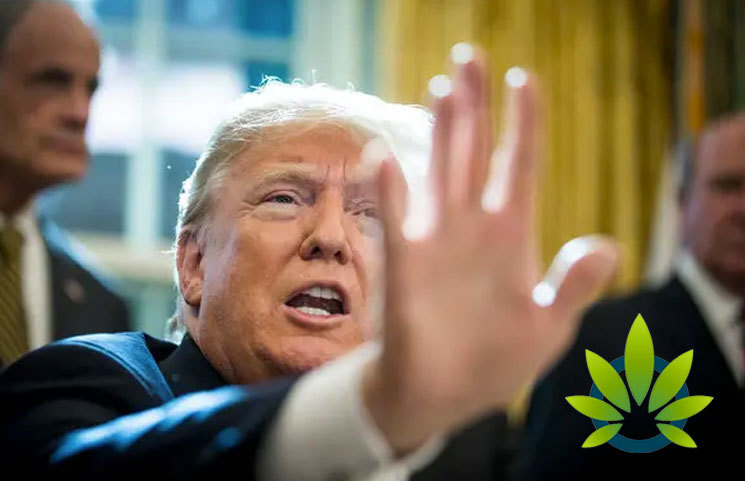 President Donald Trump has been rather quiet about his stance on cannabis lately, though he made headlines when he stated that he would most likely support a new bill that would direct states to issue their own regulations. However, in a decision that could not be further from that support, a $100,000 donation from President Trump’s salary has partially funded a new publication from the Surgeon General, warning the public about the use of marijuana.

The warning, which particularly urged pregnant women and adolescents against the use of the substance, stated that there is no level of cannabis that is safe. It also focuses on the THC potency of cannabis products, stating that it has increased, leading consumers to potential “physical dependence, addiction, and other negative consequences,” according to Surgeon General Jerome Adams.

In a press release, Adams stated that the public has adopted a false narrative that paints marijuana in a less harmful light than other drugs. To ensure that there was no confusion over his statements, he added,

“No amount of marijuana use during pregnancy or adolescence is known to be safe.”

Adams later posted to Twitter, saying that pregnant women more commonly use marijuana than any other illicit drug during pregnancy, as the statistics doubled over a 15-year period, from 2002 to 2017.

#DYK marijuana is THE most commonly used illicit drug among pregnant women? pic.twitter.com/1W8sNszIz8

The notice doesn’t actually say that the states should opt against the legalization of marijuana, but that the youth of the country are starting to see marijuana as a less dangerous drug as states work to end prohibition and normalize the use of cannabis. According to the statements in the notice, high school students have progressively believed that marijuana is less and less harmful through the last decade, coinciding with the increase of legalized use for medicinal and recreational purposes.

Interestingly enough, the use amongst adolescence has actually decreased over that time as well, which the report doesn’t shed light on. Instead, the advisory continues by saying that the availability of marijuana and the “dangerous perception of safety among youth” is a sign that the Surgeon General should issue the warning.

Jim Carroll, the White House Office of National Drug Control Policy Director, commented that the recent notice is “an important reminder” of the risk that marijuana carries, specifically for children and pregnant women. He reminded the public that, despite changing laws in favor of legalization, “the scientific evidence increasingly shows the harmful effects of marijuana use.”

“We are focused on making sure all Americans are aware of the dangers of marijuana use and the impact it has on developing minds,” he said. “The White House continues to make record investments to support community coalitions across the country that are dedicated to preventing youth substance use before it begins.”

Alex Azar, the secretary of the US Department of Health and Human Services (HHS), called cannabis “dangerous,” highlighting the harmful impact on pregnant women and the country’s youth. Azar added that the risks of marijuana use are “well-established by scientific evidence,” despite ongoing legal struggles with securing cannabis for research testing. He shed light on the “generous donation” that Trump contributed to show his support, adding that the administration is “committed to fighting substance abuse of all kinds.”

Today's @Surgeon_General Advisory has a clear message: No amount of #marijuana use during pregnancy or adolescence is known to be safe. @POTUS’s salary donation will fund a campaign to educate the public about marijuana's dangers for the developing brain: https://t.co/xSmQo9jcgr pic.twitter.com/c8kphrtp9k

Both Adams and Azar were part of a press conference on Thursday to discuss the advisory, agreeing that marijuana use is connected with “early onset of psychotic disorders, such as schizophrenia.”

Thank you @SecAzar, I am proud to stand with you to sound a national alarm about the harmful effects of #marijuana use on the developing brain with my new Surgeon General’s Advisory. #MJBrainEffects pic.twitter.com/x2G36sAMoX

There are plenty of reformation advocates that have considered the potential risks with the use of cannabis, if it were to get into the hands of young people. Many legalization models specifically state that consumers must be at least 21 years old to purchase cannabis, just like the restrictions placed on alcohol. In California, the labels on cannabis products must have a warning about using the substance while pregnant or breastfeeding.

Supporters of legalization have stated that the Surgeon General would be able to create a mandate for these types of warnings on labels, if the federal government chose to legalize marijuana. Erik Altieri, the executive director of NORML, stated that there’s “almost no activity” that doesn’t somehow put an individual at risk, which is why he is for the legalization and regulation of adult use cannabis. Still, he reminds to public to use these kinds of products “responsibly,” despite marijuana’s smaller impact on the health of consumers than legal products like alcohol and tobacco.

The notice indicates that additional research is needed to assess exactly what these risks are, and it is clear that Altieri agrees, calling the lack of education regarding cannabis a “fear-mongering” tactic. Presently, there are 33 state that have legalized the medical use of marijuana, while 11 of these states have also decided to legalize the substance recreationally. Other states have decriminalized its use, opting against incarceration for low-level non-violent offenders.