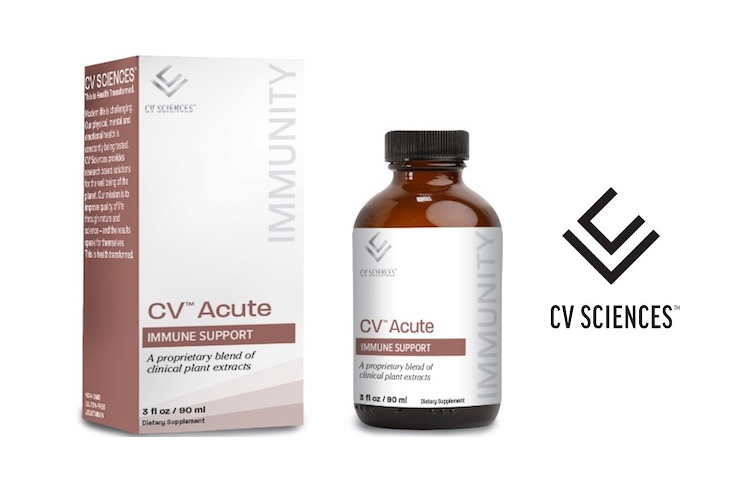 Anyone who has heard the name CV Sciences mostly associates it with their CBD products, and there have been many. However, in a report from Nutraceuticals World, it looks like the company is venturing outside of the CBD industry by launching an immunity-boosting product called CV Acute.

Stepping away from CBD, CV Acute is one of the few non-CBD products that are available from the brand, which means that it will inherently be available at more retailers than their other remedies. Per Globe Newswire,  “CV Sciences is a preeminent leader in hemp-derived cannabidiol (CBD) products, today announced a strategic category expansion into condition-specific dietary supplements with the launch of CV™ Acute, the first of several products to be launched under its new Immunity product line.” As a result of this, the brand itself gets more exposure, but the ability to get another immunity-boosting product on the market during these times can be helpful.

This new CV Acute formula includes an ingredient called V871 SHL, which is specific to the CV Sciences brand as a proprietary blend. The blend, which is based on a traditional Chinese remedy, contains multiple herbal products. Shuang Huang Lian, the treatment, was created in the 1960s, but the herbs have historically been used by different medical practitioners for hundreds of years. GlobeNewswire reports, “CV™ Acute (V871 SHL)1 is a clinically researched, wide-spectrum, proprietary plant-based formula to support the immune system and respiratory health. CV™ Acute integrates a time tested Traditional Chinese Medicine (TCM) herbal formula with proprietary modern analytical chemistry and extraction techniques2.

The formula is supported by global medical authorities and hundreds of published scientific studies that demonstrate overall immune system defense to everyday challenges with enhanced support for respiratory health.” Per Michael D. Lewis, MD, MPH, Colonel (Retired), U.S. Army, and CV Sciences Medical Advisor commented, “I was assigned to establish the Department of Defense Global Emerging Infections Surveillance Program in Southeast Asia in the early 2000s, helping manage both the SARS and Bird Flu outbreaks for the U.S. military. There I observed the tremendous value in combining traditional herbs with modern diagnosis and treatment.”

V871 SHL uses Japanese honeysuckle extract, Chinese skullcap root extract, and Forsythia Suspensa extract. The formula itself has already been examined in multiple peer-reviewed studies, with researchers backing up its performance for respiratory disorders. The trials have mostly been through the use of animals, though human tests also show that CV Acute has helped reduce how long the common cold or bronchitis may last. Furthermore, the formula seemingly has no side effects or adverse reactions.

In a review of Shuang Huang Lian in the International Journal of Biological Sciences, researchers examined the way that this formula and other traditional Chinese formulas were able to manage respiratory infections. These studies even included very early examinations of the idea that this treatment helps with COVID-19. Though this part of the research was performed in an in-vitro environment, the authors stated that the formula could “potentially inhibit” many chemokines and cytokines. CV Sciences stated,

“While the data is preliminary and should be interpreted conservatively, the strong safety profile of CV Acute indicates that it is a prudent addition to an integrated approach to respiratory and immune challenges.”

Even though the formula was once intended to have CBD in the remedy, CEO Joseph Dowling of CV Sciences remarked that it would prevent the formula from reaching many platforms that don’t allow such products.

Megalabs and Medterra CBD to Penetrate the Latin American Market