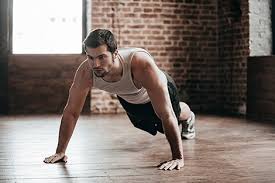 Do you wish to lessen the risk of developing cardiovascular disease? Then push-ups might be of great help, suggests a new study.

The researchers at Harvard T.H. Chan School of Public Health performed a study recently in order to learn if there exists a connection between pushups and cardiovascular disease that might result in heart attack, heart failures as well as strokes.

In the study, the researchers went through the health data of over 1100 active male fire-fighters from the year 2000 to the year 2010. The participants, aged around forty years, were asked to complete a series of medical and health questionnaires while other important data was collected from their yearly physical check-up. The researchers also took the measurement of the push-up capacity as well as treadmill exercise tolerance of the participants.

In the course of 10 years, the researchers noted 37 instances associated with cardiovascular disease. However, one or more of the incidents took place among men who finished forty or fewer push-ups right at the start of the study.

After conducting a further assessment, the findings of the study showed that chances of cardiovascular disease like heart attack and stroke were 96% lower in those participants who completed forty or above push-ups than compared to those who could complete less than ten push-ups.

Moreover, the push-up capacity was greatly related to lower incidents of heart disease instances than compared to the performance on the treadmill.

The lead author of the study, Justin Yang said in a statement that the findings of the study offer a piece of evidence that using pushups, doctors may be able to access the risk of cardiovascular disease among patients in nearly any kind of setting.

As per Kerry Stewart from the Johns Hopkins School of Medicine, one of the key strength of the study is that it depends on the person’s measure of physical strength over self-reports based on physical activity.

However, the researchers did note that there are certain limitations associated with the study. Only men who were around forty years of age were evaluated and as such, the results might vary for men or women of another age group. But still, the team believes that their findings provide strong evidence on the importance of fitness on health. In fact, a senior author of the study, Stefanos Kales said that the doctors should evaluate physical fitness while they conduct clinical assessments of the patients. The study appears in the JAMA Network Open.

US drug manufacturers fail to regulate use of painkiller fentanyl: Suggests Report