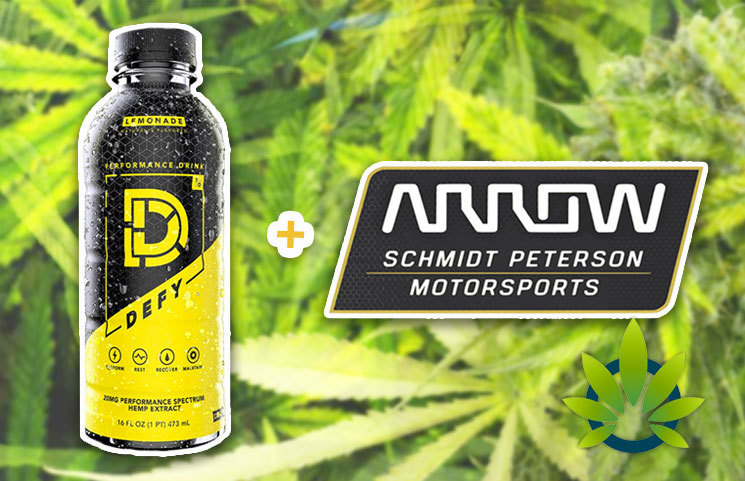 By defying CBD and professional sports’ limits, DEFY has lived up to its name as it launches this week all over the country. DEFY is in a partnership with Arrow Schmidt Peterson Motorsports in the 103rd running of Indianapolis 500, as well as the remainder of the NTT IndyCar Series 2019 season, getting pole position for the cannabidiol (CBD) industry. This is a historic moment for professional sports, racing, and the many supporters of CBD.

Defy is the first CBD-based performance drink. Scientific and patented processes are employed to remove all THC in their drinks, and the brand is focused on wellness and health. Zero THC prepares the way for a safe and credible primer of professional athletics and daily life.

Defy sells a proprietary blend with essential vitamins and minerals, and most importantly, performance-spectrum hemp extract designed to restore and revitalize the user’s body. Defy puts a tremendous amount of weight on research and compliance by their vendors and suppliers to make sure that the product line meets quality standards. The proprietary performance-spectrum hemp by Defy has delivery mechanisms that are designed to offer the utmost bioavailability.

Terrel Davis, a pro footballer, hall Farmer, and a DEFY co-founder, commented last Tuesday at their national launch in Denver that precision in racing is the similar rigorous science, and that the margins of winning or a defeat result from research and teamwork. Their goal is taking CBD from the shadows and be the defying force for Athletes. Terrel Davis hopes that people with stress, pain, and recovery CBD will consider CBD as the ideal remedy.

To partner with Arrow Schmidt Peterson Motorsports, DEFY had to be approved by INDYCAR, which needs partners within the series to achieve several standards. One of these standards is that the brand is not supposed to produce, advertise, or market marijuana-based cannabis products that have not been derived from Hemp. The branding of DEFY will be seen on Honda Powered cars that Marcus Ericsson and James Hinchcliffe will be driving – No. 7 and 5 Arrow SPM machines.

The teaming up of Arrow Schmidt Peterson Motorsports and DEFY is iconic. This partnership is ideal since both align in terms of team, science, precision, and the willpower for defying on and off the track.

Located in Denver, DEFY has Terrel Davis as a co-founder. Davis first used hemp to recover after a workout, and this changed his life. Through cannabis, he was able to recover faster between workouts and could achieve a level of locked-in results that enabled him to defy challenges that tend to hold back athletes: overworked muscles, injury history, and deteriorating effects of age. Terrel was inspired to share these benefits with athletes, and as a result, his team resolved to launch DEFY.

Defy is now the first mainstream hemp beverage specifically meant for athletes. It is formulated to help in muscle fiber recovery, hyper-focused training, and clear-headedness. Defy offers naturally derived performance rejuvenation and recovery for all kinds of athletes.

This was established in 2001 by Sam Schmidt, a former IndyCar driver, and Ric Peterson, a Canadian businessman, alongside the significant support from Arrow Electronics that partnered with the organization from 2015. At the moment, Arrow SPM competes in the NTT IndyCar Series and has over 70 pole positions, 70 wins, and 7 championship titles. You can find more information about Arrow SPM on spmindycar.com.