CBD Investment Guide: How to Invest into the Hemp CBD Industry in 2020
Advertisement 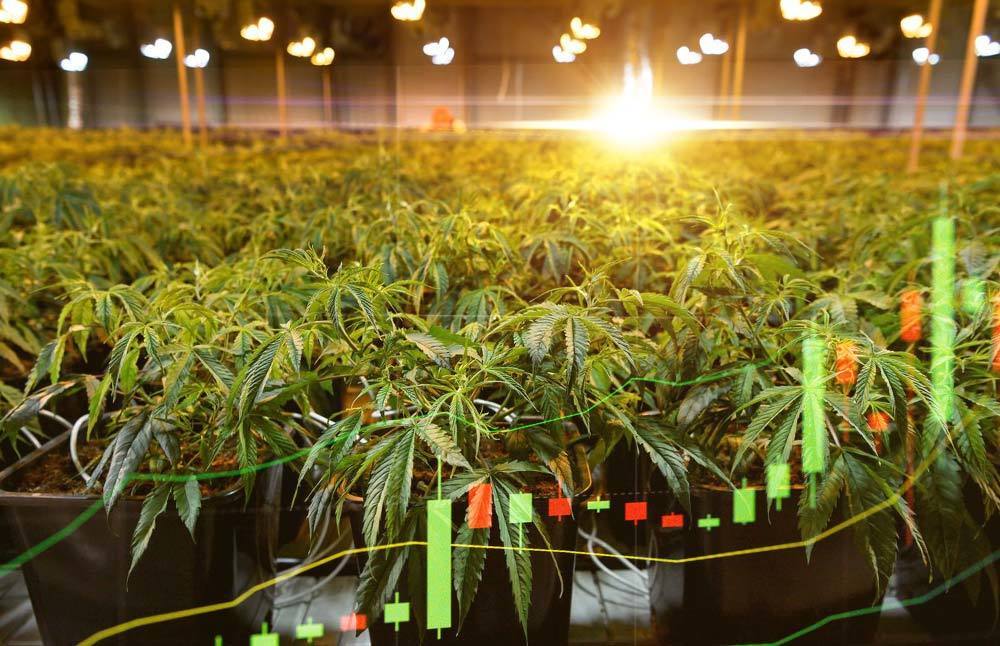 CBD has exploded with growth in recent years. Naturally, investors are interested as it became the top-selling botanical ingredient in 2019 for the natural sales channel.

But how do you invest in cannabidiol (CBD)? Is it legal to invest in CBD? Which types of companies or industries give you the best return on your CBD investment? Today, we’re answering all the questions you have about CBD investing.

Why Invest in CBD Today

Hemp and its derivatives became legal nationwide with the passage of the 2018 Farm Bill at the end of last year. Prior to that, hemp was treated similar to cannabis.

Today, growers across the United States can sell hemp and hemp-derived products including cannabidiol or CBD. Cannabis is still illegal nationwide, but hemp, which contains no psychoactive compounds like THC, is legal nationwide.

The passage of the latest bill has led to a surge in the number of manufacturers, retailers, and consumers seeking to enter the cannabidiol market.

Check out this report from BDS Analytics and Arcview Market Research that indicated CBD sales are expected to surpass a total of $20 billion USD by 2024.

That same report also predicted a compound annual growth rate (CAGR) of 49% across all CBD market distribution channels by 2024.

One reason why CBD is a popular investment is because the industry still has room to grow. Although many people have heard of CBD, few people are fully educated on cannabidiol’s benefits and uses. Jessica Lukas, Vice President of Consumer Insights with BDS Analytics said in a statement,

“CBD sales have exploded in the past several months, but there’s still a long way to go when it comes to consumer, retailer, and manufacturer knowledge.”

“56% of adults 21+ do not know or are confused about the differences between THC and CBD. That’s why we’re so excited to offer the in-depth data we do, to help guide and inform a new, booming industry.”

According to the report, $1.9 billion worth of cannabis and hemp-derived CBD products were sold in 2018. By 2024, that number is expected to grow to $20 billion.

Based on these demographics, even traditional investors are being forced to dispel with the conventional image of a cannabis user as an unemployed, lazy male. It’s 2019, and that’s no longer the case, especially with CBD.

Cannabidiol (CBD) and tetrahydrocannabinol (THC) are the two best known cannabinoids in the cannabis plant.

CBD is a naturally-occurring compound that may be linked to certain health benefits. It’s found in all cannabis plants, although hemp plants are particularly rich in CBD. It has no psychoactive properties and it does not make you feel high.

THC is also a naturally-occurring compound found in the cannabis plant. Unlike CBD, THC has psychoactive properties. This is the compound in marijuana that makes you high.

By law, hemp plants must have less than 0.3% THC content. There are no restrictions, however, on CBD content. In recent years, growers have developed strains to maximize CBD content, breeding high-CBD strains together to ensure the highest possible concentration of CBD.

Major retailers are aware of CBD and have recognized its appeal. They want a slice of the lucrative market.

CVS Health Corp. (NYSE:CVS) was one of the first major retailers to enter the CBD space. In March 2019, just three months after the passage of the 2018 Farm Bill, CVS announced it would sell CBD products at more than 800 of its stores as part of a distribution deal with Curaleaf Holdings Inc. (CSE:CURA, OTCQX:CURLF).

Curaleaf’s stock jumped as much as 17% after the announcement, giving the company a market value of more than $2.6 billion at the time (after the stock had already gained 41% on the year).

Specifically, CVS started selling CBD creams, sprays, and lotions in eight states, including California, Illinois, Colorado, and Alabama. The products are sold in store aisles and available over-the-counter without a prescription.

CVS has almost 10,000 pharmacies worldwide. The company claims that they’re not planning to sell supplements or food additives containing CBD, although that may change in the future.

CVS and Walgreens are two of the biggest pharmaceutical companies in the United States. However, they pale in comparison to Walmart (NYSE:WMT) and Target (NYSE:TGT), both of which are also exploring the launch of CBD products. A Target spokesperson told the New York Post in May,

“Like many companies, we know there is consumer interest in CBD products, and the conversation is evolving quickly.”

Consumers inevitably feel more comfortable with CBD after seeing it on store shelves. You might read about it online and assume it’s connected to marijuana, which might make you wary in states where marijuana is still illegal. If you see CBD on store shelves available for purchase as easy as a chocolate bar, it may make you more comfortable with CBD. Attorney Courtney Barnes explained in an interview during the MJBizConINT’L event in Toronto,

“The easier it is for you to be grocery shopping or in a retail outlet and have (hemp products) accessible at places you’re already going to is, I think, critical to expanding to consumption as well as education.”

How the FDA Influences CBD Investing

The FDA has monitored the rise of the CBD market in the United States, watching as a range of health and wellness products have entered the market.

CBD manufacturers cannot ignore these warning letters. In many cases, these warning letters are jointly sent by the Federal Trade Commission (FTC) and the FDA. The agencies warn that the CBD company’s marketing demonstrates a meaningful risk or constitutes as a misleading claim.

In July 2019, for example, Curaleaf received a warning letter from the FDA for selling “unapproved” and “misbranded” cannabis products and making “unsubstantiated” claims about the effects of CBD.

The FDA warning stated that Curaleaf made “unfounded claims about more than a dozen different CBD products” on its product web pages, online store, and social media websites.”

However, the FDA isn’t the “bad guy” in this situation. The agency is just doing its job and targeting producers who break regulations.

That’s why some industry players are “cautiously optimistic” about the way the FDA is treating CBD. CEO of Charlotte’s Web Holdings (TSX:CWEB, OTCQX:CWBHF), Deanie Elsner explains,

“While the Farm Bill unlocked the door for category availability, the FDA now has the opportunity to expand availability of hemp CBD products across more distribution points to benefit more consumers.”

Some of the biggest avenues for growth in the CBD industry could be in patients, treatments, and healthcare.

Some early studies on CBD have connected the compound to pain management, anxiety relief, and other potential benefits. There’s also plenty of anecdotal evidence from users who claim CBD has “cured” everything from arthritis to cancer.

It’s not all snake oil. In fact, the FDA has already approved a drug based on CBD.

In 2018, the FDA approved a synthetic form of CBD called Epidiolex for treatment of two epilepsy disorders, including Lennox-Gastaut syndrome and Dravet syndrome, for patients two years of age and older. The FDA approved the drug after it passed through controlled clinical trials and demonstrated significant benefits.

Epidiolex is made by a company called GW Pharmaceuticals (NASDAQ:GWPH).

We’ve seen something similar happen with medical marijuana. 20 years ago, medical marijuana was a niche drug supported by few medical professionals. Today, medical marijuana is legal in most first world countries because it has been connected to the treatment of post-traumatic stress disorder, multiple sclerosis, and Alzheimer’s Disease, among others.

Some doctors have already jumped on board the CBD hype train. Dr. Mark Lindholm, a chiropractic practitioner at Natural Health Family Chiropractic in Indiana, has famously published a book called, “A Doctor’s Perspective on CBD Oil: Science, Success Stories, and Changed Lives.”

In the book, Dr. Lindholm explains that “drugs aren’t the only solution that works for chronic pain, anxiety, depression, poor sleep, diabetes, inflammation, seizures, and even cancer.” Dr. Lindholm advocates a drug-free approach to healthcare revolving around hemp-derived CBD oil.

The book understandably carries a health warning stating that the FDA has not evaluated the content of the publication. Nevertheless, some patients continue to use the book, and other CBD-supporting health manuals, as guidance for alternative treatment plans.

Is It Legal to Invest in CBD?

Shark Tank host and billionaire investor Kevin O’Leary is famously wary of investing in pot stocks, claiming that he would “never” touch cannabis stocks until they’re legal at a federal level. He stated,

“Never would I touch this. Never. When you invest in a Schedule 1 narcotic, you are at risk to breach the RICO statutes of aiding and abetting the transfer of a Schedule I narcotic across state lines.”

O’Leary did, however, state that he would consider investing once marijuana is legal at a federal level.

CBD, which has been legal nationwide since the passage of the 2018 Farm Bill, doesn’t carry the same restrictions. It’s legal to invest in CBD companies.

Of course, if you want to play it extra safe, you can still invest in CBD non-directly. You can invest in CVS and Walgreens, for example, because they’ve added CBD products to store shelves.

Ultimately, you should have no legal issues investing in CBD.

CBD Investment Guide: What Should Investors Do Next?

The CBD industry is exploding with growth, but it’s far from an investing secret.

Cannabis stock have taken a few hits during the summer of 2019. Several vape pen-related deaths have dampened the enthusiasm for that sector of the market, for example. Some of the trendiest pot stocks in recent years are having outlooks adjusted now that real sales figures are coming in.

CBD sales, however, offer a glimpse at the increased interest for these products. CBD sales have been consistently strong.

Yes, CBD is trendy, but it’s a trend that may be here to stay.