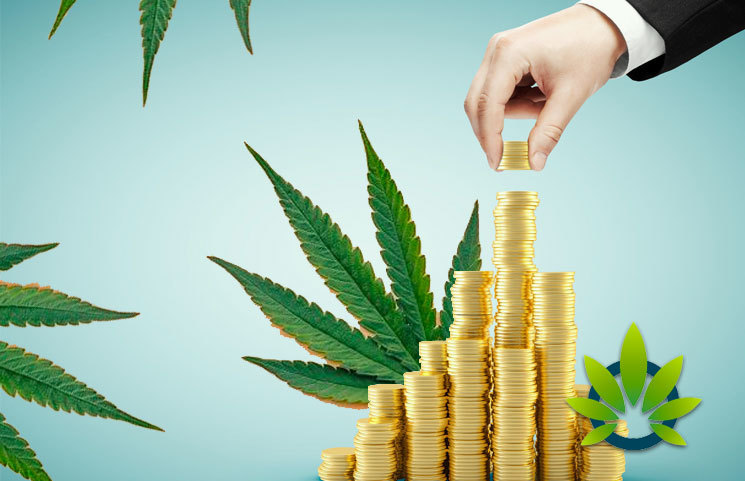 Of course, Koyfman won’t tell you the name of this company until you sign up for high high-priced subscription service. That subscription is priced at $999.

If you don’t want to pay $999 for an email newsletter but still want to identify this $1 pot stock, then we want to help. Travis Johnson over at Stock Gumshoe recently completed an investigation into Koyfman’s fabled $1 pot stock:

“This ad from Alex Koyfman is really bursting with hyperbole, and readers have been asking about it for close to a month now… so let’s see if we can get you some answers.”

Let’s take a look at what Stock Gumshoe found, including whether or not the perfect $1 pot stock really exists.

“If I had to bet my entire life savings on just one stock….this is easily the one.”

Meanwhile, prospective subscribers are greeted with an “order” button featuring the quote, “Yes, I want to get rich.”

Amidst all of this hyperbole, it’s easy to assume the $1 pot stock doesn’t exist, or that Koyfman is exaggerating.

However, as revealed by Travis Johnson at Stock Gumshoe, the $1 pot stock does indeed exist – and it’s sitting at around the same price it was sitting at in December.

Johnson analyzed quotes from Koyfman to reveal the $1 pot stock without actually signing up for the $999 subscription service.

Clues Behind the $1 Pot Stock

First, Koyfman reveals a number of clues about his fabled $1 pot stock. He claims it’s on the verge of disrupting a $146 billion global market, for example, and describes how the company “recently signed a massive three-year $54 million contract.”

He goes on to explain that this company has signed “dozens of deals” in countries like Canada, Jamaica, and Italy, as well as in U.S. states like Nevada, Washington, and California. Some of the specific deals included an $11.4 million per year deal guaranteed for the next three years.

Then, Koyfman doubles down on his hype, inexplicably stating that the company’s partnerships will 10x its revenue within the next few years:

“Based on all current partnerships, I fully expect this company to make up to 10 times more than that – per year.”

The hyperbole doesn’t stop there. Koyfman then goes on to describe how his $1 company “is more powerful than the federal government”:

“It effectively has more power than the U.S. government, twice the knowledge, and most importantly, it’s flush with cash.”

What does any of this mean? How is any single company more powerful than the federal government? These are all good questions to ask.

For these reasons, the company has been able to land massive deals “that federal institutions simply can’t take part in.” Some of the deals mentioned by Koyfman include a 1,000 acre land deal in Nevada and 40,000 square feet of indoor growing facilities in California.

Essentially, Koyfman is throwing a bunch of large and impressive numbers at you to dazzle you and convince you to sign up for his $999 newsletter.

According to Stock Gumshoe, Koyfman’s mysterious stock has to be Crop Infrastructure Corp (CROP), a CSE-listed company that functions as like a financier for the pot industry.

CROP fills a unique niche in the pot space. Today, America’s cannabis companies cannot access traditional banking and lending services because the industry continues to be largely illegal nationwide. Because of this, cannabis companies do not have easy access to bank loans, mortgages, and regular financing.

CROP is one company that has emerged to fill that niche. Today, the company fills that niche by backing land acquisition or property development in exchange for some return from the cannabis company – like equity, rent, or economic exposure to the underlying business.

In other words, Crop Infrastructure Corp works in a similar way to Innovative Industrial Properties (IIPR), which is an REIT focused specifically on marijuana cultivation. The company buys properties from or for medical marijuana growers, then leases the properties back on long-term leases. This allows growers to access financing without relying on traditional banks.

CROP, however, is not an REIT: it’s mostly a land-based financier. To date, the company appears to have signed a number of effective partnerships, although most of the growth is fueled by the company’s effective promotional and marketing spending.

As pointed out by Stock Gumshoe, there are some areas of concern with Crop Infrastructure Corp:

“Well, the primary “dislike” for me is the lack of detailed disclosure of their deals, and the massive dilution.”

The dilution could be an issue for stockholders in the future:

“Like most financiers who don’t have access to the debt markets, including IIPR, they have to issue new shares to fund their deals…. but since they’re brand new and don’t have any revenue-generating assets yet (let alone income), the share count quickly balloons because they’re selling shares for pennies to raise money for both operating costs and new projects.”

The company currently has about 133 million shares outstanding. Crop Infrastructure has filed to bring that up to 150 million. Back in May, the company had just 80 million outstanding shares. By August, the number had risen to 110 million.

“So the capital raises have been steady in their young life as an operating company (they effectively went public late in 2017, through a reverse merger, but didn’t really trade publicly until this past summer).”

Should You Buy Koyfman’s $1 Marijuana Stock

Crop Infrastructure Corp is a small player compared to larger, better-established competitors like Innovative Industrial Properties (IIPR). The company has signed a number of promising deals. However, the returns have been minimal thus far. Much of the hype surrounding Crop Infrastructure Corp seems to be fueled by effective marketing.

Here’s how Stock Gumshoe sums up the issue with Crop Infrastructure:

“Frankly, when you read the background story a little bit and see that this is a company run by an investor relations/PR guy, with a person from Stockhouse on the board, you might begin to think of it as a company that specializes mostly in convincing investors that it’s an exciting company. It doesn’t specialize in detailing how they’ll actually make money… which might be intentional, if they’re spending as much on operating the company (even without employees) as they are on the actual investments that are supposed to generate revenue at some future point.”

Ultimately, Koyfman’s $1 marijuana stock pick is an equity-based financier that may offer a high-risk, high-reward investment opportunity to certain investors.

You can read a more detailed summary of Koyfman’s Crop Infrastructure pick at Stock Gumshoe here.