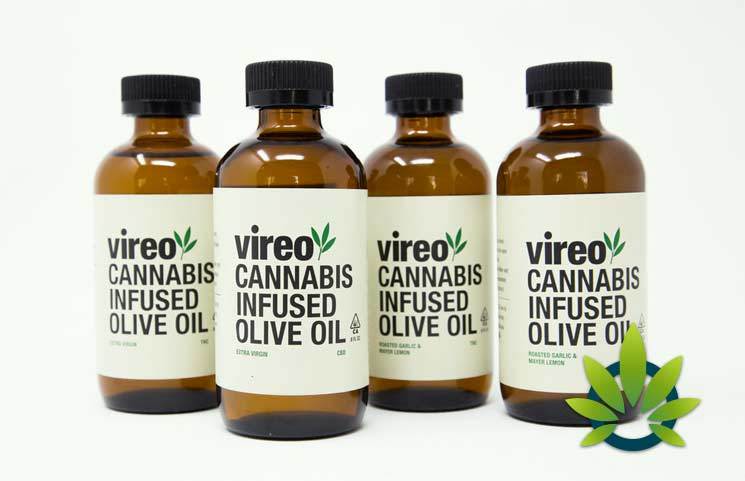 Olive oil is one of the most nutritious condiments to exist. It not only contains antioxidants; to fight against premature aging, but it also carries a heavy vitamins profile, and antibacterial and hydrating effects. Some parts of the world have and continue to use it for its medicinal properties, while others use it as a spread in various cuisines. Today, the list of uses is endless and to think that Vireo has kicked it up a notch is impressive.

Vireo, a culinary brand, has decided to combine the best of both worlds, olive oil and cannabinoids, to create the ultimate infusion that adds a delicious touch to one’s meal, while helping to attain relief to the mind and body. The purpose of this review is to further explore Vireo in terms of its intent and the line of olive oils currently offered.

As previously noted, Vireo, founded by Chef Luke Reyes, is proclaimed as a modern gourmet culinary brand that emphasizes on the health benefits of CBD and THC. Given the different properties it houses, the goal appears to be to attain full body relief while adding a flavor to one’s meal. Interestingly, Vireo is considered, “Italian by Name, California by Nature,” implying that their source of hemp extract and olive oil has flourished through Californian soil via organic procedures. Given Vireo’s unique characteristics, let’s dive right into business!

Vireo appears to have been successful in its venture as it currently carries four different olive oil infusions. In particular, one is an infusion with extra virgin olive oil and the other being roasted garlic and Meyer lemon olive oil. The twist? Both solutions come in CBD-only and THC-CBD infusions.

Based on the product description, the CBD infusions contain 4.5mg of CBD per tablespoon. This is definitely generous considering how much olive oil is used in one’s cooking. Even if two tablespoons were to be used, that is equivalent to 9mg of CBD, which has been effective in bringing positive effects in a light manner. The entire bottle comes out to 8 ounces with a total of 75mg of CBD. Also, Vireo prides themselves for using 125-year-old mission olives.

Unlike the CBD-infusion, which is purely CBD, the THC-infusion, a psychoactive component, is a mix of both. In particular, each tablespoon measures out 3mg of THC, with the whole 8-ounce bottle containing a 2:1 ratio of THC to CBD. This has supposedly been done to feel the effects while having control of oneself and their surroundings.

Vireo’s decision to stick to a 2:1 ratio appears to be safe. According to the Alpha-Cat, the set THC to CBD ratio has the ability to induce “remarkable high effects,” that is, one will tend to laugh and experience a sense of euphoria, but the side effects are mild, implying that consumers will not experience anxiety.

However, one should bear in mind that the amount of THC found in one tablespoon is not as significant. For those who are new to THC and CBD, most experienced individuals like to suggest anywhere between 2 and 5mg of THC, before hitting it up a notch, as anything more is said to be felt in a powerful manner.

Based on the analysis above, it is evident that Vireo has managed to create four distinctive infusions that meet the needs of the broader population. Those who prefer a higher THC oil and those who’d prefer to a mix of THC and CBD both have two unique solutions to choose from, which is clever on Vireo’s part.

The flavors housed within Vireo’s line of oils is simple yet appropriate for cooking up a meal or simply using it as a dressing or dip of sorts. The fact that every component found within each bottle is completely based in California will no longer be a problem, as the state has recently issued a bill that supports hemp-based products in drinks, food and cosmetics.

Speaking more in terms of the cannabinoids used in Vireo, consumers should note that they do not contain terpenes or others besides CBD and THC. The reason for doing so has been shared as preventing the distortion of the olive oil’s true taste, which is fair.

Although the claims made suggest Vireo’s CBD source as being reliable, the necessary evidences have not been available. With competition booming within this respective industry, such measures are anticipated. Interestingly, many online outlets, such as LA Weekly, Allure, Variety, GQ, Prohbtd, and Leafly have since covered Vireo’s oils, which can also be considered as some form of trustworthiness.

Finally, Vireo’s infused oils currently go for approximately $45 each, which is reasonable, if not inexpensive, considering the quality attained in the olives themselves, along with the strength of THC and CBD found. To see what Vireo is all about for yourself, check out: vireofood.com