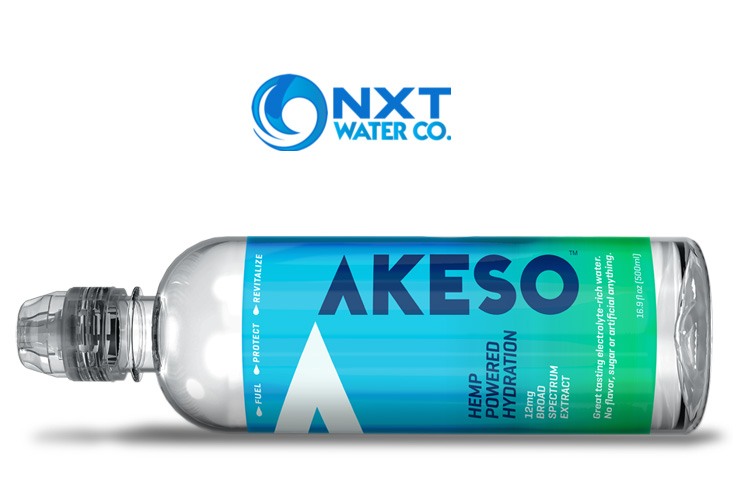 NXT Water announced in a press release the launch of its new product, AKESO Hemp Powered Hydration. The beverage is a “12mg broad spectrum CBD water” and is the “first all-natural plant powered beverage to integrate hemp-derived CBD and electrolytes in 100% pure still water,” according to the press release. The beverage has zero calories, and no flavor or sugar.

The beverage is also tested by an independent third-party lab, and the results are 100% verifiable using the blockchain backed QR code that appears on the bottle. The press release explains that the CBD beverage was first released in successful test market campaigns in Southern California and New York fitness chains and retail partnerships. The product release was expanded to now include an e-commerce platform.

“Our team has had the unique opportunity to evaluate more than a thousand beverage brands, as well as supporting the growth across the full lifecycle, from the first case and up to more than a billion dollars in revenue,” said Geoff Schneider, CEO of Cava Capital. “I have always focused on the most critical success factors, and with the addition of our team I am tremendously optimistic about NXT Water’s competitive advantage and expected growth trajectory in this booming category.”

In addition, NXT Water has also added Tony Kalich as the Head of National Sales and Distribution. He also shared his views on the CBD product in the press release:

“From the moment I met the NXT Water team I knew we had a product that would completely disrupt the beverage industry,” said Kalich. “I am tremendously optimistic about AKESO’s competitive advantage and the ever-growing seasoned sales team that I have already onboarded. I’m excited to lead this highly motivated sales team and collaborate daily with the executive leadership at NXT to expand our business around the country.”