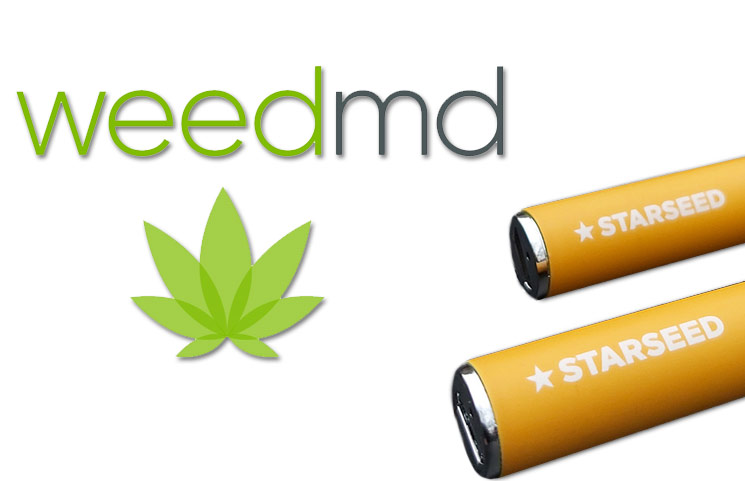 WeedMD Inc. has announced that it will now use a low-cost production strategy for all its outdoor cannabis products. This will be the new modus operandi for a modern strain-specific vape that is targeted for Canadian medical patients. The latest in-house product, known as Aurum Vapes, will be produced at CX industries, a WeedMD extraction hub.

This is according to a Monday press release. WeedMD, which is based in Toronto, Canada, announced that it will soon introduce its newest vape products into the adult market. This will likely be done in the third quarter of the year, coming out as the Color Cannabis brand.

The Ghost Train Haze, which is a THC-dominant type, will be the first strain to be released into the market. Other products, which are expected to follow, include CBD, and the Mango Haze, which is a CBD-dominant strain. The company announced that, regarding the new vapes, it would generally utilize some weed for the indoor harvests. The products will be initially made available first to patients who are registered with WeedMed’s medical subsidiary, known as Starseed.

Angelo Tsebelis, the CEO of WeedMed, released a statement to give the public an idea of the company’s latest strategy:

“Our company’s cannabis 2.0 plan was devised after a lot of consideration of the needs of our medical clients. We especially took into consideration the patient’s craving for a remedy related to specific indications that would, likely, call for a precise cannabis prescription, using various delivery methods.”

“After some time, and based on extensive research, our company came up with Aurum as the best, viable alternative method of consumption. This is a testimony to the unswerving commitment of our in-house, home-grown team in the determination to cultivate, extract, process, and develop a solution that will offer lasting benefit to the patients.”

According to WeedMD, the new vape hardware came up as a result of efforts by the New York-based Blinc Group. This is a renowned producer of a custom vaporizer. Significantly, all the new vape units are designed to meet the safety regulations of Health Canada. Moreover, the batteries and cartridges are designed with the 510 thread, which is the accepted industry standard.

For this reason, they are guaranteed to be compatible with several products that exist in the Canadian market. According to Moe Jiwan, who is the CCO of WeedMD, specific minimum standards characterized the company’s new operations:

“In the production and development of Aurum Vapes, we made sure that safety, health, and quality always featured as the top priority.”

“After many months of persistent testing, the constant collaboration between the teams and various partners, and continuous testing, out came the finished product; the now-famous Aurum.”

Notably, in the last fall, the overall sales of legal vapes in the US fell sharply. This was attributed to the new rise in lung illnesses were traced back to vape use. Nevertheless, a study that was done this year by the American Medical Association indicated that people who reside in US states that allowed recreational cannabis were much less likely to be subjected to lung injuries that are related to vape use. Those who live in states prohibiting the use of vape were, on the other hand, more likely to suffer such problems.

These results corroborate research that was carried out by the Centers for Disease Control and Prevention-CDC. The agency had reported that the use of vaping products or e-vaping, which is linked to EVALI or lung injury, is probably a result of market-sold vape cartridges. This kind is illegally sourced and distributed in the black market.

The WeedMD company reports that the first-quarter revenue for its products is expected to soar up to $12 million, up from the $2.85 million, which was the reported revenue in 2019’s fourth quarter.

This is a record growth in revenue.

Earlier in the month, the renowned producer started its second season of the outdoor growing endeavor. This was marked by the planting of about 18,000 cannabis clones. This was achieved at the WeedMD’s Strathroy, Ontario-based 27-acre outdoor field. The company intends to turn more of the low-cost outdoor biomass, converting it into cannabis 2.0 products. This is expected to feature under the various third-party models, as well as the company’s brands.

WeedMD’s CX facility is also produced more than 50,000 kg of biomass per year. This is likely to represent the peak production. Further, according to WeedMD, the development would help in coming up with new white labeling opportunities, apart from the provision of tolling to other brands and producers.

Last November 2019, WeedMD publicly announced that the first-ever outdoor harvest had produced 8,950 kg of cannabis biomass. The production cost for this impressive harvest was estimated at about $0.11 for every gram.

New Cannabis Drinks Report from Prohibition Partners Predicts Over $1.8 Billion in Sales for 2020