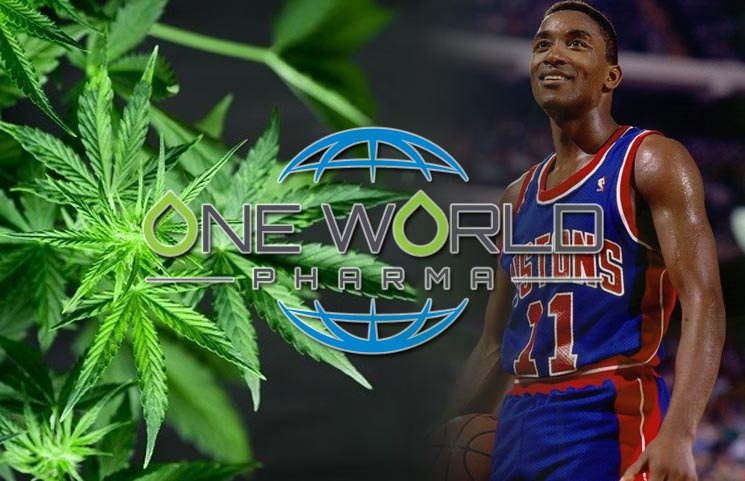 Former NBA player Isiah Thomas has just been appointed the CEO of a US-based CBD company that grows marijuana and hemp in Colombia. The name of this company is One World Pharma. Thomas well known for his 13 seasons of playing for the Detroit Pistons, now asked by One World Pharma to replace CEO and founder Craig Ellins, of One World Pharma, who wants to retire as the CEO of the company. Beginning June 4th, 2020, Thomas, will take the firm's position of Vice-Chairman of One World Pharma's board of directors.

Headquartered in Las Vegas, One World Pharma cultivates hemp on a 30-acre facility in Colombia, in the region of Popayan. Here, it focuses mainly on developing genetics. Besides, it also runs an educational facility for the marijuana and hemp farmers in the area. According to the company, over two years have been spent on growing solid relationships with native farmers in Popayan. One World Pharma closed full agreements with these farmers, to cultivate its genetics and to have the grown biomass returned here.

President Brian Moore mentioned in a statement that One World Pharma also runs a greenhouse of 125,000 square feet in the region, as it has been granted by the Colombian government to characterize the hemp and cannabis varieties. The company has a license to globally deliver hemp ingredients for manufacturing over-the-counter CBD products and consumer packaged goods. In the over-the-counter shops and markets, it trades under the OWPC designation.

One World Pharma and Isiah Thomas

One World Pharma is a fully licensed global supplier of hemp-derived ingredients for use in the manufacturing of Medical, Consumer Packaged Goods (CPG), and Over the Counter (OTC) products.  As a producer and distributor of high-quality cannabis and hemp raw plant ingredients, OWP offers a reliable and sustainable supply chain for product manufacturers worldwide.

Isiah Thomas, is one of the 50 Greatest Players in NBA History, an accomplished and highly regarded international business executive and investor with a whole host of companies in his portfolio, he has developed via Isiah International Inc. Thomas has also in the past, served on the Chicago Stock Exchange’s Board of Governors, was a co-founder of the NBA’s Toronto Raptors, Popcorn Indiana, and currently a member in 2013 to present on the Board of Get-in Chicago, an organization focused on preventing gang violence in Chicago.

Thomas's Involvement in the Cannabis Industry

Thomas currently is an owner of  Vesl Oils, with 2 locations and a partner at a Vesl Colorado facility which produces CBD products and the Oklahoma location is handling THC byproducts and medical marijuana