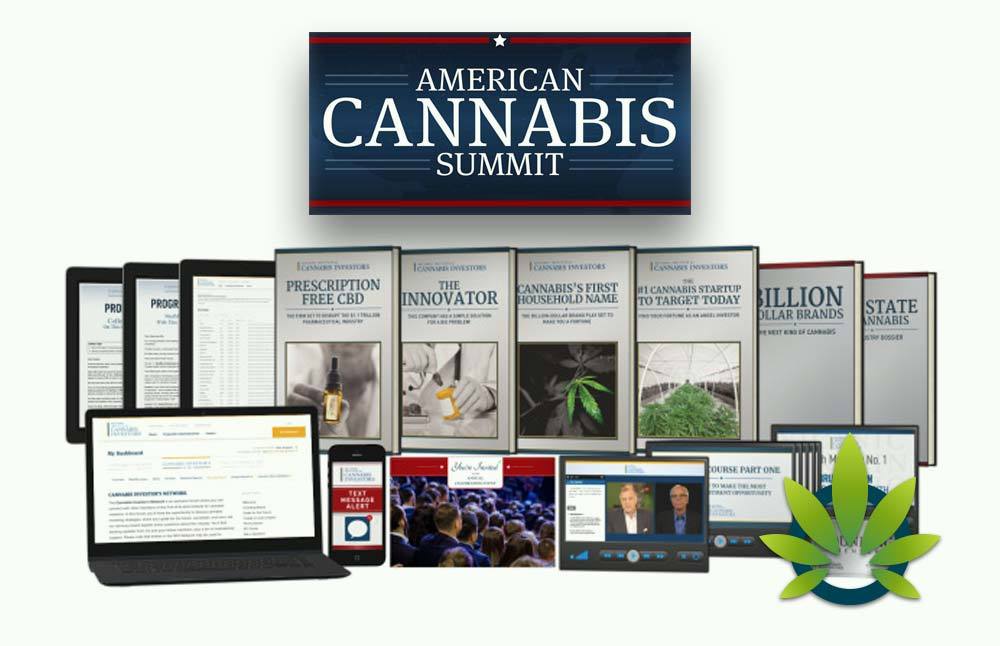 If you are interested in investing in the rapidly-growing American marijuana industry, then you may have stumbled upon an online event called the American Cannabis Summit: Countdown to Legalization.

Brody is described as a “cannabis IPO expert”. He is described as the “architect” behind two of the largest cannabis IPOs in history, including Emblem Corp in December 2016 and The Green Organic Dutchman in May 2018. Brody took both of these companies public.

Mike Ward, meanwhile, is the host of the event. As for John Boehner, he’s involved with the event because he claims he’s “all in on cannabis”. The former Speaker of the House recently joined a cannabis company called Acreage Holdings.

Throughout the course of the event, the three men explain the future of the cannabis industry in America, including how investors can take advantage of the growing industry.

Although the event is available for free online, the goal of the event is to sell you various cannabis investment information products. At the end of the event, investors will be offered a package of eBooks and a subscription to the National Institute for Cannabis Investors priced at $39. You can also sign up for membership in the National Institute for Cannabis Investors.

Let’s take a closer look at what you’ll learn in the American Cannabis Summit Countdown to Legalization Event, as well as whether or not the products are worth purchasing.

Topics Covered in the Countdown to Legalization Event

The American Cannabis Summit’s Countdown to Legalization Event covers a broad range of topics from across the crypto space, including some of the anticipated changes that could affect American cannabis producers in the near future. Here are some of the major topics covered during the event:

The Success of Canada After Nationwide Cannabis Legalization

During the event, Danny Brody mentions that he was the architect behind two of the largest cannabis IPOs in history. The two companies are now worth $1.6 billion. Both companies are Canadian, and they’re now using that capital to expand cultivation across Ontario, Quebec, and Jamaica.

Canadian cannabis companies are succeeding because cannabis is legal nationwide.

Canada’s success story could easily be replicated in the United States. California has a higher population than Canada, for example. However, cannabis firms in California and other legal states face challenges when selling products nationwide. If certain problems can be solved, however, then the cannabis industry could skyrocket with growth in the United States – similar to what we’ve seen in Canada.

One of the problems facing the cannabis industry is that cannabis companies are cut off from using regular banks. Cannabis companies struggle to work with the traditional financial system in the United States. Some rely on local credit unions. Others get more creative. If pot becomes legal nationwide, then these banking problems could be solved overnight.

Former Speaker of the House John Boehner is asked about the current government’s views on legalization. Boehner claims to be friends with Donald Trump. Here’s what he had to say about Trump’s stance towards legalization:

“If I tell you about our private conversations, I won’t have any more of them with the president. What I’m willing to say is…After I came out in favor of cannabis, President Trump said, “I agree with Boehner. I think he's right.”

“Trump’s Treasury Secretary – Steve Mnuchin – seems to be voicing support for legalization. He’s quoted as saying the cannabis industry’s banking problem is on the top of his list and his team is working on it now.”

Here’s how Boehner explained the issue during the event:

“This comes down to yet another boondoggle at the IRS. There is a specific code that needs to be reformed – IRS Code 280E. In a nutshell, if you have a business that directly touches cannabis – like dispensaries – you can’t deduct normal expenses. Employee salaries, rent, utilities, advertising – that kind of stuff. I’m telling you, some of the most brilliant minds in accounting are now focused on the cannabis industry – they’re creating these complex strategies for working around IRS Code 280E. In reality, they won’t need to do that much longer. This is the low-hanging fruit. The easiest challenge to solve. My former House colleagues are already working on this.”

“Once we change IRS Code 280E, every company in the cannabis industry instantly gets a massive tax cut.”

Other Problems Facing the Cannabis Industry

Ultimately, the main point of the American Cannabis Summit’s Countdown to Legalization Event is to explain the various problems facing today’s cannabis industry. Today, American cannabis companies are being forced to jump through a number of hoops to sell their products legally. These companies are surmounting the challenges today, although many of these challenges won’t exist in the future.

What is the Event Trying to Sell You?

This event wasn’t run for charity purposes, nor is it an informational event. Instead, the American Cannabis Summit Countdown to Legalization event is an infomercial designed specifically to sell you various online products.

The goal of the event is to convince investors to buy eBooks and newsletters featuring hot stock tips for the marijuana industry.

During the event, the speakers try to dazzle you with claims of earning “10,000%” on the right cannabis stock. They’ll talk about three stocks they picked that “jumped at least 50,000%”.

Meanwhile, the event features testimonials from “real customers” who claim to have got rich quick by using the investment advice provided by the National Institute for Cannabis Investors. One user claims he made $5,000 in his first month, for example, and now earns $1,200 to $1,300 per day by following their investment advice. Another user claims he made $15,000 in three days by following the hot stock tips.

By following their investment advice, according to the event’s speakers, you can expect similar gains in your own portfolio – even if you know nothing about investing.

Once you get to the end of the lengthy event, you’ll be faced with another infomercial where former Speaker of the House John Boehner tries to convince you to sign up for digital eBooks and subscription plans.

If you sign up for a subscription with the National Institute for Cannabis Investors, then you will receive a number of different digital products. There are three different subscription levels, including:

All subscriptions provide the same access to the National Institute for Cannabis Investors. You will become a member of the National Institute for Cannabis Investors for one or two years. The main perk of the membership, as far as we can tell, is that you will receive periodic emails featuring hot stock tips for the cannabis industry. As mentioned above, the company claims investors can expect gains of 10,000% to 50,000% by following the investment advice provided in those email newsletters.

Why would you buy a gold, diamond, or platinum level subscription? There are different reports for each subscription level, including:

About the National Institute for Cannabis Investors

The company lists the following address as its headquarters:

The National Institute for Cannabis Investors is an investment analysis platform that offers advice to prospective marijuana industry investors in the United States. This past month, the company released a free online video called the American Cannabis Summit: Countdown to Legalization. The event featured former Speaker of the House John Boehner and cannabis IPO expert Danny Brody. The purpose of the event was to highlight issues facing American cannabis firms while also explaining opportunities for investors.

At the end of the event, the team tries to dazzle you with stories of ordinary investors making gains of 10,000% to 50,000% by following the investment advice provided in the National Institute for Cannabis Investors newsletter. The company claims investors – even those with limited investing experience – can expect to earn massive profits by following the advice provided in the newsletter.

You can sign up for the National Institute for Cannabis Investors newsletter at a price of $39 to $129 for a 1 to 2-year membership. Your membership comes with various online reports.

To learn more about the National Institute for Cannabis Investors and their latest American Cannabis Summit, visit online today at https://nicinvestors.com/