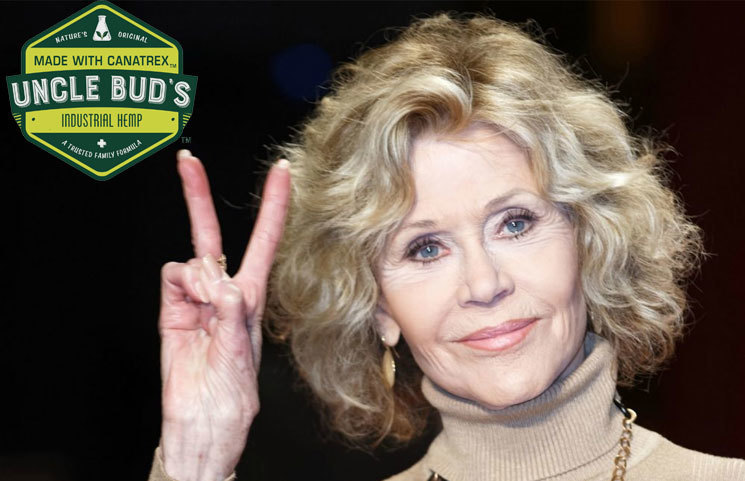 On Wednesday, May 13, 2020, renowned hemp and CBD brand, Uncle Bud’s chose Academy Award-winning actress, activist, and reintroduced fame of the show, Grace and Frankie, Jane Fonda as its brand ambassador. As per the press release, this partnership will last throughout 2020 with the latter actively marketing and advertising their products.

Co-Founder of Uncle Bud’s Garrett Greller disclosed that picking Fonda was a simple decision to make. In particular, he stressed that it rested heavily on “her activism” and the fact that her “values align with the company […] there is no question that she is an icon of health and wellness both past and present.”

Since the announcement, Fonda took her social media platforms – with well over 1.5 million followers combined – to share the first of their advertisements.

.@unclebuds_hemp sent me a self-care package, which has been helpful in me keeping my groove. Thanks for the Uncle Bud's Hemp Hand Sanitizer, CBD Lip Balm, and Hemp Body Lotion. And an even bigger thanks for donating 1,000 free hand sanitizers to @safeplace4youth #advertisement pic.twitter.com/RadQvCpV04

In it, she shows herself applying Uncle Bud’s Organic Hemp Seed Oil Hand Sanitizer ($9.99 for 8 ounces), the 5mg CBD Lip Balm ($8.99 for .35 ounces) and the 120mg CBD Body Lotion Agave Scented ($15.99 for 8 ounces). The video has since garnered 25,000 views, which does not come of surprise! On her Twitter account, she also shared that Uncle Bud’s has since donated 1,000 hand sanitizers to a non-profit called Safe Place for Youth!

In discussing her involvement in the CBD industry, Fonda expressed nothing but excitement as she appears to connect to the brand’s viewpoint on health. In particular, she said:

“Wellness has always been incredibly important to me and these hemp-based products recently caught my attention.” She further went onto highlight a number of Uncle Bud’s facets, including the fact that the products are “eco-friendly, cruelty-free and, most importantly, effective!”

In an interview with WWD, Fonda disclosed that Uncle Bud’s was the one to reach out to her. Before making things official, she got her hands clean by actually trying the products over a couple of months. Once she was satisfied, she took up on their offer:

Regardless many facets that she obviously appreciates, there’s one that would ultimately make or break her decision:

“If it wasn’t a U.S. made product and eco-friendly and animal-kind, I wouldn’t have gone near them.”