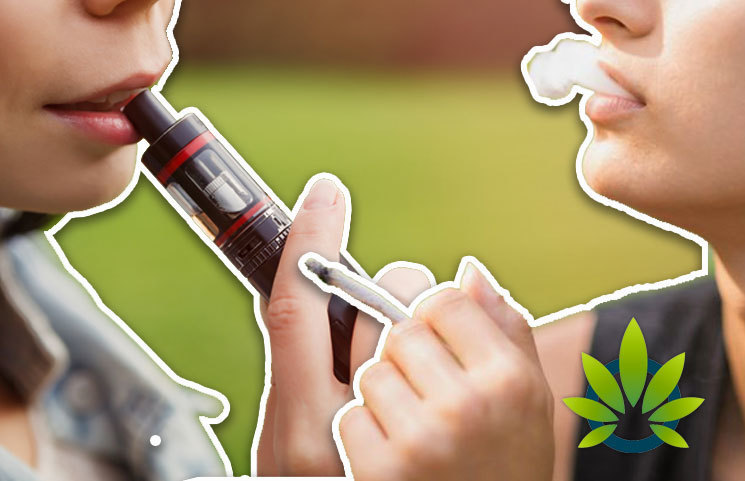 Inhalation, in general, is the fastest and most effective way to experience the effects of cannabis. When inhaled, the effects of the herb can be felt within minutes. Those seeking to get relief from pain, anxiety, and stress from the herb, perhaps it is difficult to find a better method than inhaled herb. It is easily understood that inhaling any burnt matter is no way good for our health.

For people seeking to get the beneficiary health effects from cannabis, inhaling smoke may not be a suitable way to use the plant. This is the reason why many of the users are switching to vaping their cannabis. It is a topic of debate whether smoking or vaping is the best way to take cannabis. With a growing number of cannabis users in the state, the facts need to be learned on the two approaches of using the plant. In the following context, we will go through some of the common questions in the minds of the users and their respective answers.

Is Dry Vaping Safer Than Smoking?

Smoking cannabis requires to burn the herb and in this process, there are several other chemicals entering our body through the smoke. Inhaling this burnt smoke of cannabis also includes other chemicals like carbon monoxide, and potential toxic ones like benzene, naphthalene, and toluene. This chemical can be carcinogenic and instead of getting the positive effects from the plant, the user may end up getting the worse.

Inhaling the vapor from vaping cannabis doesn’t cause irritations and other respiratory illness like bronchitis and lung cancer. While smoking may cause irritation to many users. That is why many novice users also tend to start their cannabis use with the help of vaporizers to skip the coughing and throat irritation part.

How Does a Dry Herb Vaporizer Work?

Dry vaporizers are designed to melt the cannabis components rather than burning them. Initially, the cannabis is put into the heating chamber and then the heating element is turned on and the temperature is set(or some have a fixed working temperature). There is a mouthpiece to draw in the vapor. Vaporizers come with a rechargeable battery and some have a detachable mouthpiece.

What is the Appropriate Temperature?

Temperature plays the most important role that separates smoking from vaping. While vaping, there is a serious consideration of temperature as the different cannabinoids present in the cannabis plant have different boiling points. In many vaporizers, the user is given liberty to control the temperature so that they can control the substances they are inhaling. Most common working temperature is in between 330 ℉ and 370 ℉ (165-187 ℃).

Heating at lower temperatures has several benefits. Heating above 440 ℉ will burn the cannabis components. At this temperature, it is equivalent to smoking. Some research on the boiling points of several cannabinoids has revealed that THC-A boils at 220 ℉, while THC boils at 315 ℉. At this temperature, the strong sedative and psychoactive effects and the anti-tumor, nausea and pain aiding effects of THC can be felt. Other cannabinoids like Caryophyllene and D-Limonene which treats anxiety, depression and gastric reflux boils at 349 ℉. The nonpsychoactive cannabinoids CBD and CBN boil at 356 ℉ and 365 ℉ respectively. They help in treating inflammations, pain, sleeplessness, tumors, and epileptic seizures. Some cannabinoids like Linalool and Humulene which also aid in treating insomnia, anxiety, inflammations and tumor boil at 388 ℉. At 451 ℉, combustion takes place and harmful by-products are released.

Is Any Preparation Required?

It is better to remove the seeds and stems from the dry herb. Also grinding the herb exposes more resins to heating temperature. This makes the cannabinoid extraction process more efficient and getting more out of the cannabis. So just like in smoking up, prior cleaning the stuff is better in cases of vaping as well. Also after using the vaporizer, the chambers which are a detachable need to be cleaned for the next use.

Is it an Irritation to the Lungs When Vaped than Smoked?

Many users experience cannabis in different ways. Though for the maximum users, it is less irritation to the throat and lungs when it is vaped rather than smoking with blend of tobacco. Dry vaping doesn’t induce the impulse of coughing. It gives a mild flavor of the herb. Vaping the steam of the dry cannabis doesn’t give out billowing clouds like in electronic juice vaporizers.

What is the Difference in High from Vaping and Smoking?

It is very subjective when it comes to experiencing the effects of cannabis. However, in vaping as there is a set or controlled temperature environment where the herb is being heated, the user can experience the specific benefits of the herb. Vaping dry indica strain would give an energetic high rather than the anxiety or panic trip when smoked. So we can say that the users can track their high and other effects. The user can also experience different tastes in the same cannabis at different temperatures.

What to Look in a Good Vaporizer?

Though vaping is a healthier way to use cannabis, the means with which to do it are not created all equal. It is better if the potential user does some prior research on it. Some vaporizers are made of metal and alloys which is not recommended for high heat. While some may contain too many plastic pieces near the heating element. These materials may release unwanted gases as they also get heated up to some extent.

Users wanting to buy a new vaporizer should avoid thinning agents like propylene glycol and polyethylene glycol which are present in the cartridges. The material used to make the vaporizer should be medical or airline grade. The heating elements are better if made of stainless steel, titanium or ceramics. Opting for ceramic or glass vapor paths is suitable for cleaning purposes. And lastly, it would be best to choose a vaporizer with temperature control so as to customize the intake of cannabinoids. If the vaporizer fits into the pocket what else is needed!

If cannabis is self-grown, then vaping would be the fastest and most efficient way to get the effects. It would be the ultimate ‘farm-to-table’ way to consume it. When it is grown by self, there is doubt in the content of pesticides or harmful chemicals on the plant. So the user can get a satisfying high and other benefits.

Users seeking for the medicinal benefits from the cannabis plant would prefer to vape the dry herb rather than smoke it. As for the recreational users, either work as both methods give the traditional high.

Analyzing Hemp’s Naturally Versatile, Diverse and Mighty Power as the Plant of the Future