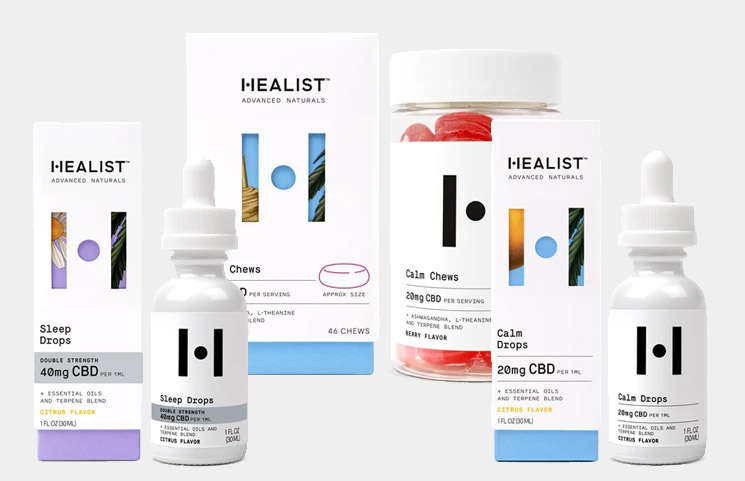 Healist Naturals’ motto is that “Science Unlocks Nature”. The products offered by this company are among the best in the CBD market. They range from CBD oils to patches, chews, and topicals made with high-quality CBD and include CBDA, CBG, CBN, CBC, and therapeutic components like amino acids, terpenes, vitamins, and nutrients too, The hemp used by Healist Naturals are sustainably and organically grown, not to mention the company emphasizes consumer education and transparency when it comes to its products.

The Healist Natural Oils consist of different formulations referred to as:

All four products are available in 600 mg CBD/ml and 1,200 mg CBD/ ml in the Double Strength version. The featured flavors are Citrus and Peppermint.

What Ingredients Do Healist Naturals CBD Oils Use?

When it comes to ingredients, the Healist Naturals CBD oils contain only all-natural ingredients such as lemon essential oil, citrus oil, stevia leaf extract, turmeric, ginger, and grapefruit essential oil. All Healist Naturals CBD oils combine terpenes and flavonoids, which are both amazingly effective at maintaining a healthy lifestyle. Healist also uses a QR code and batch code that allows consumers to view all lab reports so you can see exactly what goes into each product.

Extraction and Processing at Healist Naturals

Healist Naturals have strong business principles and ensure its customers use only high-quality products. The hemp used by the company is organically cultivated and grown in the US, with plenty of water and sunshine, without any chemical fertilizers, herbicides, or pesticides. When it comes to extraction of the CBD from the hemp plant, Healist Naturals uses CO2 because this method is considered to be superior and to keep the hemp compounds such as cannabinoids, flavonoids, and terpenes intact.

At the same time, Healist removes all THC detectable traces during extraction, which means its products provide the health benefits of broad-spectrum CBD without causing a high. They’re the best option for those who are looking to take advantage of the hemp plant but don’t want to experience the effects of THC. Furthermore, Healist Naturals company is very transparent about its work and products, so it performs triple lab testing for all the products they make and sell. Triple testing means it tests the raw materials and every batch of products for consistency, potency, and purity. There’s also a third and final test to ensure quality. Healist products are also:

As mentioned earlier Healist Naturals offers oils, gummies, and patches, all formulated with CBD. The oils have 2 strengths, of 600 mg CBD/ml and 1,200 mg CBD/ml. They also have different names and contain specific ingredients.

The gummies made by Healist Naturals are available at $84.99, with 460 mg of CBD per 20 mg serving. They’re called Healist Chews and come in the Sleep and the Calm versions. The ingredients for each version are specific to the health benefits they’re meant to provide, for example, L-theanine for calm and ashwagandha for stress relief. One Healist Naturals gummy contains 20 mg of CBD. The flavor for the gummies is berry.

Available at prices ranging from $39.99 to $54.99, the Healist Naturals topicals include:

Healist Naturals CBD patches are perfect for rapid pain relief. They’re also available in 2 options: Calm Infused and Relief Infused. Each patch can provide 24 hours of pain relief. Customer service may be able to help with any support customers may have at; customerservice@healistnaturals.com

Healist Naturals is a company that stands behind what it says. It offers transparency and high-quality products. Besides, it cleanly presents itself, providing on its website all the information people need to know about its products. This means buying from them is an educated decision. The packaging of Healist Naturals products is eye-appealing, whereas the products are very easy to use. Orders from this company come with free shipping. Besides, Healist also offers its customers the option to subscribe to receive their products every 30, 60, or 90 days. This would save 20% with every order, which is a good deal for anyone who needs CBD products regularly.

While relatively a new company, Healist Naturals managed to earn the trust of many CBD consumers. Healist products have been tested not only in-house but also by third-party labs, so they’re sure to provide the health benefits of the hemp plant in a timely and efficient manner.

For further inquiries about Healist CBD products visit their website [healistnaturals.com], or by phone at 1-833-HEALIST.