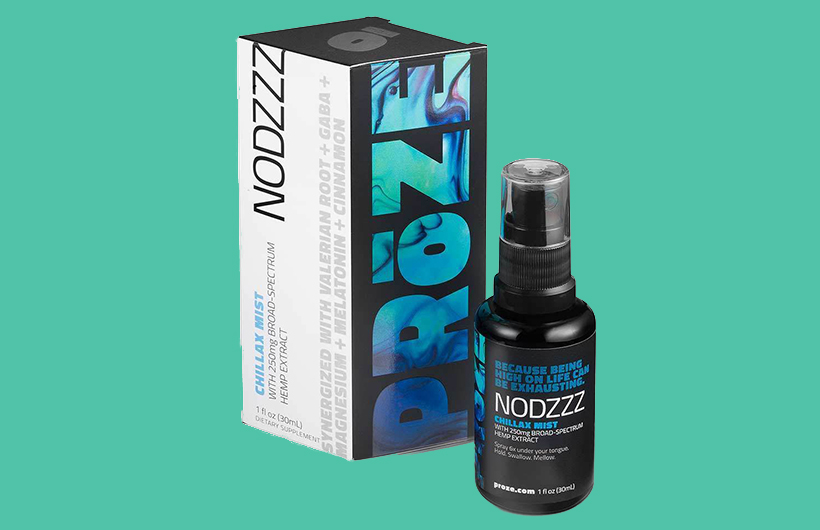 NODZZZ is a nightly CBD supplement to help the users sleep better without loading the body with pharmaceutical ingredients. Rather than being condensed into a capsule, it is available in a spray that can easily be digested and absorbed quickly.

Everyone needs a good night of sleep. Even just struggling one or two nights out of the month to rest can harm the brain and body. Sleep is a reprieve from the day's stress, and the brain needs this time to relax. Some people find they are struggling to sleep because they can't calm their mind, while others can fall asleep but wake up multiple times throughout the night. Rather than taking another sleeping pill, NODZZZ can help.

NODZZZ addresses multiple issues in the body simultaneously, including inflammation, an overactive nervous system, and issues in brain chemistry.

Why Other Products Don’t Work

Even though many products are on the market right now to help with sleep, they may do more harm than good. Far too many people try to medicate away their problems rather than solve brain chemistry issues and lower overall stress levels. Many people have lifestyle habits that cause their sleep problems in the first place.

Take caffeine, for example. By consuming too much caffeine throughout the day, the body cannot purge it by the time it goes to sleep. After a while, caffeine wreaks havoc on the adrenal glands and prevents hormones from properly regulating.

Some people have so many difficulties falling asleep they seek out medication from a doctor. However, apart from how addictive sleeping pills can be, they also cause major digestive issues in the gut. Even choosing a generally available product in a pharmacy, like a nighttime syrup, can slowly cause the user to become dependent.

The entire point of a sleeping aid is to help the body naturally enter sleep so that it does not have to be taken forever. With NODZZZ, it is possible to get that fix.

To make NODZZZ effective, the formula is a blend of CBD with essential oils and other ingredients. Every bottle contains 250 mg of CBD, meant to help the user relax enough to get some helpful sleep. The CBD is sourced from broad-spectrum hemp extract, which means that the creators only use a specific portion of the plant to create this compound.

With CBD, consumers will experience more energy during their waking hours, but this will not impact the way they sleep at night negatively. Apart from CBD, this formula includes:

Cinnamon is primarily used to reduce inflammation. While it may seem like a strange choice to choose a formula that reduces inflammation, consumers should think about their typical habits when they're stressed out. Cortisol can make people crave unhealthy foods like bread, wine, dessert, and pasta. These foods can cause inflammation to rise, though it also causes blood sugar levels to spike. Without balanced blood sugar levels, the user’s energy is unpredictable, and the body cannot relax when the surroundings are too chaotic. In this case, the chaos would come from within, but cinnamon can help to stop it.

The last few ingredients, melatonin, GABA, and valerian root, focus on maintaining the brain's right chemistry to reduce stress and anxiety. Stress is a big reason that many people stay awake at night, but it isn't just about the fact that their mind can't stop racing. The brain is constantly receiving signals from the nutrients to act differently, but the mind needs a moment to be quieted to rest finally.

Once users receive their supply of NODZZZ, they will be able to use it every night. Approximately 12 minutes before the user plans to go to sleep, they will need to spray the formula 12 times under their tongue, holding it sublingually for 12 seconds.

To see how well the CBD formula works to promote better sleep, the users can track their sleep with an app on their phone.

To encourage consumers to use the formula, PRōZE is offering a challenge to try out the product for five days. Instead of charging the formula to the user, they are provided with this five-day supply for free. The only fee that the user is responsible for covering is the shipping cost.

Shipping and handling cost $3, but the creators assure the public that additional promotions will happen soon.

NODZZZ can work for anyone that just hasn't been able to get the sleep that they desperately need. The remedy is easy to use, especially since there is no need to get a glass of water to swallow chalky capsules. Plus, it isn't a tea that users have to grow to love. Instead, with 12 seconds and 12 sprays, users can rest easy.